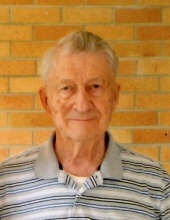 Alexander Hopp, age 90, of Sheboygan passed away peacefully on Thursday, June 18, 2020, at Sunny Ridge Nursing & Rehabilitation Center, where he had been a resident for the past 7 years.

Alex was born on August 14, 1929, in Sheboygan to the late George & Anna (Heinze) Hopp. He attended local schools and graduated from Central High School. He furthered his education, graduating from UW Madison with a doctorate in Law. Alex started his law career in the district attorney's office but then moved on to private practice with Hopp, Hodson & Powell (a firm that still bears his name as Hopp, Neumann, Humke.) He was the very first Corporation Counsel for Sheboygan County and served in that role for 40 years, earning a reputation for his dedication, integrity, and character. Alex was active in his community and church, with leadership roles in organizations such as the Rotary Club and the Sheboygan YMCA. He founded the Orange Book Club to help other lawyers to stay current with the law.

Alex was united in marriage to Irene Nyenhuis on November 5, 1952, in Sheboygan. He enjoyed gardening, going on fishing trips with friends, and building houses with his son. His family will cherish memories of his quick wit, wisdom, epic salads, and love of popcorn. He will be dearly missed by all who knew him.

Along with his parents, Alex was preceded in death by a daughter, Anna Mae Tan, and his brothers Reinhold and Robert Hopp.

Private family services will take place. Alex will be laid to rest in Sunrise Memorial Garden. In lieu of flowers, memorials can be sent to the Sheboygan County YMCA.

The family would like to extend a heartfelt thank you to the entire staff at Sunny Ridge Nursing and Rehabilitation Center for the loving care given to Alex.