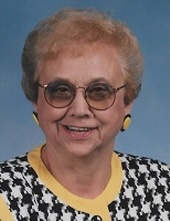 Audrey A. Potter, 92, of Sheboygan, passed away on Saturday, April 25, 2020 at The Shores of Sheboygan.
She was born October 27, 1927 in Sheboygan to the late Ervin and Maud (Bruinooge) Timm. She attended Bethlehem Lutheran Grade School and graduated from Central High School with the Class of 1945. Following graduation, Audrey worked for Dr's F.A. Nause and A.B.C. Bock from 1945 until 1951.
On May 1, 1948 she was united in marriage to Edward J. Potter, he preceded her in death on August 16, 2006.
For a time, she worked for the Burkhart Heisdorf Insurance Agency. In 1962, she became the office manager for Dr's Frederick P. Nause and Christopher Graf, until her retirement in 1992.
Having a strong faith in God, Audrey was a member of Community Church in Sheboygan.
Audrey is survived by her two sons, Joel (Laurie) Potter of Lake Barrington, IL and Keith (Sue) Potter of Sheboygan; grandchildren; Benjamin (Kelly) Potter, Megan Potter (fiancée Dave Ekholm), Samantha (Mark) O'Leary, and Sarah (Ryan) Baartmans; three great granddaughters, Isabelle Potter, Riley O'Leary and Quinn Baartmans; sister-in-law, Wilma (Ray) Potter; and a sister, Lois Karsteadt. She is further survived by nieces, nephews, other relatives and friends. Audrey was preceded in death by her parents, husband, an infant son Scott D. Potter, an infant grandson Scott J. Potter and brothers and sister-in laws; Wesley (Rita) Timm, Kenneth (Wilma) Timm and brother-in-law, Vernon Karsteadt.
The family would like to extend a special thank you to her niece, Claire Alger for her exceptional kindness, patience and grace during her weekly visits and the flowers that she and her sister Brenda Potter provided over the years. They were always a highlight of Audrey's week.
A private entombment ceremony for her surviving family will take place at Lutheran Cemetery. A celebration of Audrey's life may be held on a later date. Memorial contributions may be given in Audrey's name to the Sharon S. Richardson Community Hospice.

To order memorial trees or send flowers to the family in memory of Audrey Potter, please visit our flower store.