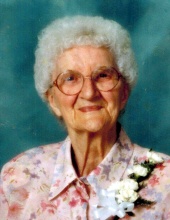 Bernice Alma Gensch, age 96, a resident of Pine Haven Christian Home, passed away Saturday March 4, 2017. She was born in Sheboygan January 1, 1921 a daughter of the late Charles and Loretta (Bruder) Kauer.

On April 26, 1941 Bernice married Howard B. Gensch. He preceded her in death on May 5, 1992. Bernice had been employed at Garton Toy and later Jefferson School Cafeteria. She was a member of St. Dominic Catholic Church. In 1995, Bernice made her home with Susan and Mark Stevens.

Bernice truly had a love and zest for life. She was loving, sweet and spunky, and full of laughter. Her children were taught life and home making skills, and friends were always welcome in her home. She loved the game show network, and played her hand-held Yahtzee game daily for over 20 years.

A Funeral Service will be held for Bernice on Thursday March 9, 2017 at 6:00 p.m. at Ballhorn Chapels Funeral & Cremation Care Canter with Reverend John Berg officiating. Interment will be in Calvary Cemetery on Friday. A time of visitation and support will be held for the family at Ballhorns on Thursday starting at 4:00 p.m. until the time of the service.

A memorial fund has been established in the name of Bernice A. Gensch.

The Gensch family wishes to thank the staff of Pine Haven Christian Home for the loving care Bernice received as a resident.