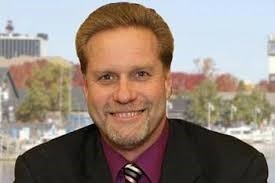 Bob moved to Sheboygan in 1974 to the Black River area with his parents and 7 siblings.  He referred to the move from the Chicago area as a move to paradise.  He and his friends spent a lot of time in the woods in their amazing fort that they built.  Bob graduated from Sheboygan South High School in 1981. Despite earning stellar grades throughout his high school years, he was not yet ready for college.  He enlisted in the United States Marine Corp.  He spent four years on active duty.  He served in North Carolina, Japan and California before coming back to North Carolina.  While in the Marines he married Ronda Senecal (Birschbach).  After his honorary discharge from the Marines he stayed in North Carolina and established his own Painting Company known as Superior Painting.  After some years of success he sold the company and returned home to join the family business, Ryan Oil Company. In 1995, Bob  married Mary Renzelmann of Sheboygan.  Bob worked in the family business focusing on growing and branding the company.  After much success, a decision was made 17 years later to sell.  Bob was ready to move on to something new.  Bob was a people person.  He could start a conversation with anyone and end up friends in a short time.  He was a problem solver and always thought “big”.  He ran for alderman for the 2nd district in 2006 and was elected.  He enjoyed his job as Alderman so much that he wanted to go further and run for Mayor.  In April of 2009 Bob Ryan became Mayor Bob Ryan.  He was honored to serve. Bob had a rather simple common sense approach.  He was not a politician and would strive not to be one.  He wanted to serve and meet the needs of the city. He wanted to run the City just like he would run his own business with high service standards.  He was a leader but also knew the importance of a team.  His plan was to bring together the incredible talents of his team and work together to make our city meet the need of its citizens and be a desired destination for others.  For his time with the City, Mayor Bob Ryan and his team accomplished so much.

He was best known for his bigger than life personality.  He dreamed big and went after those dreams with conviction.  His children were most important to him as he loved each one immensely.  He enjoyed family.  Ryan Family Christmas dinners, gatherings at the Lake House and vacationing with his family were when Bob was most content.  He also enjoyed going fishing, cooking out, and spending time at Road America with Blake.  Bob was not fond of shopping but would be sure that Ashley and Abigail had their two hours in the Vera Bradley Outlet store while he “patiently” waited.

Bob served in the United States Marine Corp from 1982 to 1986. He was awarded Marine of the Quarter, seven Meritorious Masts, as well as numerous other recognitions.

In lieu of flowers, memorial donations can be made in Bob's name Payable to Memorial of Bob Ryan.

“Never Forgotten. You’ll never be forgotten that simply cannot be.  As long as I am living, I’ll carry you with me.  Safely tucked within my heart your light will always shine; a glowing ember never stilled, throughout the end of time. No matter what the future brings, or what may lie ahead, I know that you will walk with me along the path I tread.  So rest my angel, be at peace and let your soul fly free.  One day I’ll join your glorious flight for all eternity.”  -Unknown

To order memorial trees or send flowers to the family in memory of Bob Ryan, please visit our flower store.