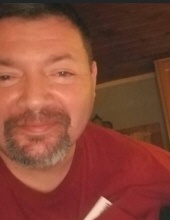 Charles A. Houseye, age 42, of Sheboygan passed away unexpectedly on Monday, October 26, 2020.

He was born on December 25, 1977, in Sheboygan to Willard Houseye and Leona (Hersant) Redig. Charles attended Kiel schools and earned his GED.

Charles enjoyed the outdoors, especially fishing and camping. Above all, Charles loved being with his family.

Charles was preceded in death by his mother Leona Redig.

A private Celebration of Life for Charles will be held at a later date.

In lieu of flowers a memorial fund has been established in Charles name.

Event Information
Services will be set for a future date to be determined.
To order memorial trees or send flowers to the family in memory of Charles Houseye, please visit our flower store.