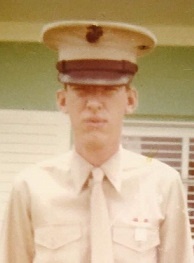 He served two tours in SE Asia in the United States Marine Corps during the Vietnam War.

Charles is survived by his daughter, Jodie Pope; three grandchildren, Jack, Kirsten, and Luca; two sisters, Donna of Florida and Jenny of Texas; three stepchildren of a previous marriage, Cory, Wendy, and Mickey; along with many cousins and friends.  Charles was lovingly called Papa Ohio by his grandchildren and will be deeply missed by his family.

He was preceded in death by his parents, stepson Chris Winkler and his brother John.

The family would like to thank the Chillicothe VA for their help throughout the years and his caregiver Denise.

Haller Funeral Home in Chillicothe and Ballhorn Chapels is assisting the family.

To order memorial trees or send flowers to the family in memory of Charles Pope, please visit our flower store.