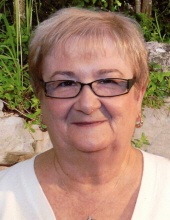 Cynthia R. Trempe passed away early Saturday morning, April 18, 2020 at Sharon S. Richardson Community Hospice. She was 72 years old.
Cindy was born on June 27, 1947 to Jerome and Ruth (Schaefer) Leonhardt. She attended local schools, Jefferson and Urban, graduating from North High School in 1966. Cindy had a special place in her heart for children and after raising her own children, she provided day care in her home and became another grandma to those children. She retired in 2012.
Cindy was a member of St. John's UCC in Sheboygan and enjoyed camping with her husband, reading, boating, playing games and being with her family.
Cindy married Leslie Trempe on April 15, 1967. She is survived by her husband Les and their children, Scott (Kris) Trempe and Lori (Jeff) Wilsing. In addition she is survived by her grandchildren: Nicole Klauck, Zachary Trempe, Devon Wilsing, Raymond Bruder, and Cory Klauck; great-grandchildren Cloe Wilsing and Carter Bruder; sister Sue Leonhardt; brothers Gary (Kathleen) Leonhardt, John (Merry) Leonhardt, Larry (Patricia) Leonhardt; brother-in-law Ronald (Jane) Trempe; sister-in-law Sharon (James) Kresl, nieces, nephews other relatives and friends.
She is preceded in death by her infant son Christopher, her parents Jerome and Ruth, and her in-laws Wallace and Lucille Trempe.
Due to current restrictions a private family entombment will be held at Greenlawn Memorial Park and a celebration of Cindy's life will be held at a later date.
Cindy was appreciative of the care and comfort given to her by Rev. Greg Whelton, Dr. Michael Brooks and his staff, as well as the staffs of Devita Sheboygan, Sheboygan Health Services and Sharon S. Richardson Community Hospice.
Please visit www.ballhornchapels.com to leave online condolences.

"If there ever comes a day when we can't be together, keep me in your heart. I'll stay there forever."

Event Information
Services are private.
To order memorial trees or send flowers to the family in memory of Cynthia Trempe, please visit our flower store.