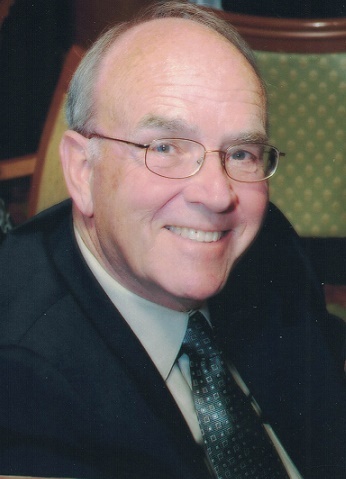 David J. Rogers, age 84, of Sheboygan passed away peacefully on April 5, 2022, at his home surrounded by his loving family.  He was born in Sterling, IL on April 4, 1938, to the late Paul and Nellie (Higby) Rogers.  He earned a bachelors degree in political science from St. Ambrose University in Davenport, IA and a masters degree in business from Loyola University in Chicago.  David served in the United States Army from 1961 until 1967.

On February 2, 1963, he married Carolyn Baier at St. James Catholic Church in Arlington Heights, IL where he was an active member in the parish council and Knights of Columbus for almost 40 years.  Dave spent most of his career in the “HR Arena”, as he would say, retiring in 1999.

After relocating to Sheboygan, David became a member of Holy Name Catholic Church and served on the St. Vincent de Paul board of directors for their thrift store.

David enjoyed reading and watching all sports, particularly football.  He also liked a casual round of golf.

David was an active listener with a keen sense of humor.  He thoroughly enjoyed socializing with family and friends.  He was wonderful, kind and fun to be around and whoever he met was a better person for it.

Along with his parents, David was preceded in death by a daughter Anne Clarke; a granddaughter Grace Meyer; a brother Paul Rogers; and a sister-in-law Pat (John) Eiserman.

A Mass of Christian Burial for David will be held at 1:15 PM on Tuesday, April 12, 2022, at Holy Name Catholic Church, 807 Superior Ave. in Sheboygan with Father Mark Brandl officiating.  Family will greet visitors at church on Tuesday from 11:00 AM until the time of mass.  David will be laid to rest in Calvary Cemetery.  For those who would like to watch David's service virtually can do so on his obituary page on the funeral home website.

In lieu of flowers, memorials in David's name can be sent to Sharon S. Richardson Community Hospice.

The family would like to thank the staff at both Embrace Care Management and Sharon S. Richardson Community Hospice for the excellent care given to David.

To order memorial trees or send flowers to the family in memory of David Rogers, please visit our flower store.