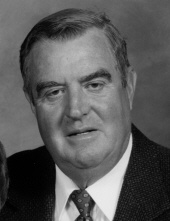 Derald Joseph Bell of Sheboygan passed away on Tuesday, August 25, 2020, at Pine Haven Christian Communities where he had resided for the past two months. He was born in Shullsburg, Wisconsin on May 11, 1929 to Harold and Helen True Bell. The family moved to the Two Rivers area in 1945 and he was a 1947 graduate of Washington High School in Two Rivers. His high school English teacher nicknamed him "Ding" and it stuck. He graduated from the University of Wisconsin Madison in 1954 with a Bachelor of Science degree and was commissioned a Second Lieutenant in the U.S. Army Corps of Engineers. He served two years of active duty followed by 15 years in the Reserves attaining the rank of Major.
On August 16, 1952 he married Jean Napiecinski at the Grace Congregational Church in Two Rivers. They moved to Sheboygan in 1956 where he was employed by the Lake to Lake Dairy Cooperative as a field man and assistant manager after which he became a sales rep for the Permacel Division of Johnson & Johnson winning the prestigious Ring Club award 5 times in 7 years for outstanding salesmanship. Several years later he bought Peterson Chemical Company now known as Torginol. The highlight of that business was installing flooring at the White House and the Goddard Space Flight Center. He sold the business in 1992 to daughter Kristin and started Bell Tape, Inc. where he worked with his daughter Diane and son Tom who is the current owner of the business.
Derald was a 60-year member of First Congregational Church UCC, serving as chairman of the Board of Trustees and as Sunday School Superintendent. He was a member of Elks Lodge 299 and a former member of Pine Hills Country Club, the Economic Club and the Jaycees. Several years ago the UW Alumni Club of Sheboygan County honored him as Outstanding Alumnus of the Year. In his spare time he enjoyed playing cards, especially bridge as well as golfing, watching sports and reading historical novels.
He is survived by Jean, his wife of 68 years, two daughters, Kristin (Ed) Abell, and Diane (Jim Ohlschmidt) Bell, a son Thomas (Sarah), six grandchildren, Nathan (Katie) Abell, Christopher (Lacey) Abell, Helen Bell, Kara Bell, Ryan Bell and John Bell. One great-granddaughter Rory Abell and two sisters, Mary True Bell and Dorothy Liska. Derald's children have great memories of riding horses at the family's hobby farm. His grandchildren called him "Mucka" and remember being treated to homemade malts, chocolate covered cherries, and playing games and doing puzzles together.
He was preceded in death by his parents and brother Charles.
A graveside service will be led by Reverend Jim Hollister at the Immanuel UCC Parish Cemetery, 3694 CTH FF, Plymouth, WI on Tuesday, September 1, 2020 at 10:00 A.M. Friends of the family are welcome to attend.