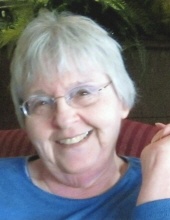 Come to me, all you who are weary and burdened, and I will give you rest.

Dianne went home to the Lord on the morning of February 25, 2018 in Scottsdale, Arizona under the loving care of Hospice of the Valley. She was 71 years old.

Dianne "Di" was born on March 7, 1946 in Sheboygan, Wisconsin to William and Lorraine (Carey) Thomson. She was a graduate of Sheboygan South High School, Class of 1964. During high school, Dianne was actively involved in choir and won several state championship medals. Dianne went on to attend Iowa State University in Ames, Iowa. In college, she continued to pursue her passion for music, specifically 60's folk music, and played acoustic guitar in local coffee houses.

On February 25, 1967, Dianne joyously married her high school sweetheart, Arthur Richard "Ricky" Kraft. The couple was blessed with a baby girl. Unexpectedly, Ricky passed away on January 7, 1968, at the age of 21.

For more than thirty years Dianne held the position of office manager for her father's automobile dealership, Motorville, Inc. Additionally, she served as bookkeeper for his powersports business, Thomson Marine. In 1999, Dianne and her brother, Scott, became business partners in the marine dealership, which Scott had managed since 1973. Construction of the new Thomson Marine building was completed in 2000, where Dianne served as vice-president until 2015.

Throughout her entire life, Dianne was relentlessly devoted to charitable organizations and generously served others in whatever capacity was needed. In her twenties, she volunteered with the public library and delivered books to shut-ins and continued to utilize her musical talents by playing her guitar and singing in local nursing homes. In her thirties, Dianne was a member of the Junior Women's Club in Sheboygan, holding various leadership positions within the organization. For more than thirty-five years Dianne tirelessly served on the board of the Sheboygan County Half-Way House (The Abode), holding positions including secretary, vice-president and president. Dianne was a devoted board member of the Mental Health Association in Sheboygan and volunteered countless hours to programs aimed at employing and integrating individuals with mental and developmental disabilities back into the community. Remarkably, Dianne organized and volunteered at the local Sheboygan County Jerry Lewis Muscular Dystrophy Telethon from the very first event until the last. Dianne was a proud member of the Sheboygan County GOP, serving fourteen years as its treasurer.

In 1983, Dianne was among the initial organizers of the WATVA (Wisconsin All-Terrain Vehicle Association, Inc.). She served the WATVA for 10 years holding positions including membership director, secretary, vice president, and executive director. Dianne's absolute passion was riding ATVs in northern Wisconsin as well as teaching and certifying youths to ride and enjoy the sport safely. Dianne was a DNR (Department of Natural Resources) Instructor and an ASI (ATV Safety Institute) Instructor. She enthusiastically taught ATV safety classes for four years at various dealerships in Wisconsin and at the Sheboygan County Fairgrounds. Her friends describe that Dianne was "absolutely fearless" while she charged through the muddy trails on her four wheeler. Shrouded in mud, she could be heard laughing a mile away. Loving chilly weather and snow, Dianne delighted in riding her ATV on the ice at Crystal Lake in the winter and exploring the groomed winter trails in Lodi and Antigo, WI.

Baking in her kitchen, was Dianne's favorite way to relax. She loved to try new recipes and brought trays of treats to work to share with her employees. She also made delicious chocolate candies, and for many years she gave decorated tins filled with her delicacies as Christmas gifts to neighbors and friends in Sheboygan. In Arizona, Dianne continued this tradition and became known as "The Cookie Lady" cheerfully delivering her goodie bags to one and all.

In April of 2014, following a diagnosis of cancer, Dianne moved to Arizona to live with her daughter and seek medical care at Barrow Neurological Institute and Mayo Clinic Hospital. In the Valley of the Sun, Dianne began a new chapter in her life. With unwavering grace, patience, and humor, Dianne's incredible determination enabled her to face adversity with laughter and courage. Her journey was heroic and inspirational to all she encountered. Dianne touched countless lives in Phoenix. She began working with the Evangelical Sisterhood of Mary at Canaan in the Desert in Phoenix, assembling thousands of prayer booklets. Dianne's journey with cancer took her life in directions she would have never imagined, but it never stole her smile, ceased her laughter, or dampened her optimism. Dianne was a woman of unfathomable kindness. She leaves a legacy of pure love for her two precious grandchildren.

Dianne is survived by her mother, Lorraine Thomson of Sheboygan; her daughter, Amy (Dr. Randall) Piette; her grandchildren, Lauren (18) and Alex (12) all of Phoenix, AZ; her brother, Scott (Audrey) Thomson of Sheboygan Falls; her sister, Chris (Paul) Stenklyft of Plymouth; and many dear friends in Wisconsin and at Sagewood in Phoenix, Arizona.

In addition to her husband, Ricky, she was preceded in death by her father, William Thomson.

Please join Dianne's family to share memories and stories at a gathering in her honor on Saturday, March 10th, 2018 from 1- 3pm at the Chapel of Eternal Light at Greenlawn Memorial Park in Kohler, WI. The memorial service will take place at 3pm with Rev. John Berg of Trinity Lutheran Church officiating. If desired, friends may make memorial contributions to the following organizations that touched Dianne's heart: Sheboygan County Humane Society, and Hospice of the Valley, 1510 E. Flower Street, Phoenix, AZ 85014.