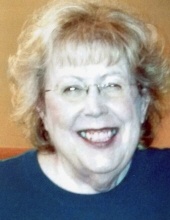 Dimple was born April 25, 1944 in Stevenson, AL, to the late George and Doshie (Davis) Lovelace. In 1962, she graduated from Sheffield High School and attended the University of North Alabama. Prior to marrying late Jerry Adams on May 27, 1988, she was married to John Brazelton of St. Louis, MO, and Crawford Smith of Sheboygan.

While in Alabama, she worked at Enmar Paints as an office manager. After moving to Sheboygan, she worked for H.C. Prange Co. as a secretary. She later worked as a foreman at Kohler Co. and a group leader at Weight Watchers. Dimple and Jerry then established Charter Express 43, a tour company to help fund their passion for supporting color guard.

Dimple had many interests and hobbies and was involved in many organizations over the years. She was a member of Welcome Wagon, where she served as president for one year. Dimple became involved with the Accents of Sheboygan, where her love for the kids and the activity led her to serve as president and board member and to provide ten years of service in the parents' organization. Through her work with the color guard, she was able to touch the lives of hundreds of kids. In addition to her work, Dimple kept busy with church activities and loved music, playing bingo, league golf, traveling, and being with her children and grandchildren. She was a longtime member of Grace Episcopal Church and the Ladies Auxiliary at VFW Post 9156, where she helped start their monthly bingo. Dimple also loved her country and was very passionate about local and national politics.

Dimple is survived by her special friend Donald "Donny" Schomberg and his brothers and children, her children, Jeff Brazelton (Gloria Ziegelbauer) of Sheboygan, Elizabeth (Brazelton) Schmidt (Mike O'Gara) of Sheboygan, her step-children, Joedi (Adams) Cerfus of Muskego, Jerry (Gretchen) Adams of Portage, IN, her grandchildren, Brittany (Adams) Klemme (Garrett) of Sheboygan, Mariah Bowman of Chicago Heights, IL, Stuart Schmidt of Sheboygan, Kendra Adams, Victoria Adams, and Jacob Adams of Portage, IN, David Cerfus of Muskego, WI, great-grandchildren, Marco, Parker, and Milo, and her sister Barbara (Lovelace) Greene (Michael) of Marshall, VA. She is also survived by Jerry's sisters, many nieces, nephews, and close family friends, as well as her puppy, Miss Una, who was often in her lap.

Dimple is preceded in death by her father, mother and infant daughter (Baby Brazelton). She is further preceded by her husband Jerry, her sister Patti McGee of Sheffield, AL, and her brother P.W. Lovelace of Florence, AL.
A Mass of Christian Burial will be held at 12 noon on Thursday, January 3, 2019 at Grace Episcopal Church, 1011 N. 7th St. in Sheboygan. The family will receive visitors at the church on Thursday from 10:00am - 12:00 noon. She will be laid to rest at Greenlawn Memorial Park beside Jerry.

A memorial fund has been established at Grace Episcopal Church in Sheboygan. The family would like to thank the doctors, nurses and staff at Sheboygan Memorial Hospital, Sheboygan Health Services, and Sheboygan Aurora Hospice Care for their support and encouragement. A special thanks to Dr. Steven Kream and Dr. Hani Alboushi for their care and love for many years.