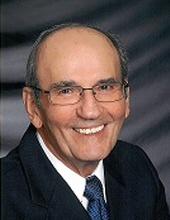 Dr. Marvin George Jumes M.D., passed away peacefully Thursday, January 18, 2018. He was born in Sheboygan on September 21, 1933 to the late George and Bessie (Collias) Jumes. Marvin graduated from Sheboygan Central High School, earned his bachelor's degree and Doctor of Medicine from the University of Wisconsin Madison.
He served in the U.S. Air Force as Chief of Anesthesiology at Fairchild AFB in Spokane, WA. After practicing in Bend, OR, he returned to his hometown joining the staffs of Sheboygan Memorial and St. Nicholas hospitals in 1965. Marvin retired in 1998 after 37 years of Anesthesia practice.
As an outdoors man, he enjoyed riding his tractors, caring for his 40,000 trees, splitting, and stacking wood. A true dog lover, his loyal companions were always at his side. Marv had varied interests including flying his Bonanza A36, playing tennis and racketball, skiing, biking, and running. One of his favorite comments was "Walking is good" no matter how far away we parked! Door County and Hilton Head Island S.C. were favorite vacation destinations for Marv and Pat.
Survivors include his loving wife Patricia, children; George (Jane) Jumes, Paul (Jenni) Jumes, Deborah Jumes, Elaine Jumes, Elizabeth (John Reid), and Gregory (Jennifer) Goedde. Grandchildren; Christopher, Andrea, David, Greg, Elise, Ana, Illiana, Meghan, and Erin Jumes, Katherine, William, and Stuart Reid, Stephanie and Samantha Goedde, and three great-grandchildren, brother Louis (Mary) Jumes, a special niece Jessica and nephews Charles and Michael Jumes.
Preceding him in death were his parents George and Bessie Jumes, younger brother Charles and mother-in-law Stephani Schmidt.
He will dearly be missed and always be remembered as a conservative man, never afraid to express his opinion, or give advice. Those words of wisdom will continue to guide his children and grandchildren....always.
Friends and family will join in a Memorial Gathering at Sheboygan Yacht Club on Friday, February 16th at 1:00 PM. Any memorials may be made in his honor to Sharon Richardson Hospice Center or charity of your choice.
Patricia extends special thanks to Dr. S. Kumar, the staff of Vince Lombardi Cancer Clinic, Sharon Richardson Hospice Center, Father Leo Gavrilos and special friend Karl for their care and assistance.

To order memorial trees or send flowers to the family in memory of Dr. MD, please visit our flower store.