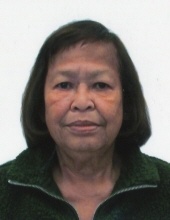 Elena "Nena" Mueller lost her battle against cancer on September 10, 2018. She died at home with family members present.

She was born May 27, 1945 in Amadeo, Cavite, Philippine Islands to Maria and Monico Gemeno. She attended St. Joseph Academy in the Philippines. She met her husband in Manila while he was on shore leave with the US Navy in 1969. She married William Mueller on August 4, 1971 in Angeles City, Philippines.

She moved to Sheboygan in December, 1971 and resided there until her death. She worked at Thonet Industries until it was destroyed by fire, and then went to Nemschoff Chairs until her retirement in 2009.

Nena was a person that loved fun and made friends wherever she went. Her favorite vacation spot was the island of St. Maarten. She also loved bingo and traveled to bingo halls very regularly after her retirement.

She is survived by her husband Bill and sisters-in-law: Nancy (Darrel) Harmelink, Carol (Gene) Specht, Connie Call and Celia Gemeno and many nieces and nephews. She was preceded in death by her parents and an older brother, Antot.

It was Nena's wish to be cremated, and a private family ceremony was held.

In lieu of flowers, donations can be made in her name to the Sheboygan Humane Society.

The family wants to thank the staff of Matthews Oncology for the professional care she received over the last six months. The last caregiver they would like to thank was her nurse from Sharon S. Richardson Community Hospice, Michelle.

Event Information
Services are private.
To order memorial trees or send flowers to the family in memory of Elena Mueller, please visit our flower store.