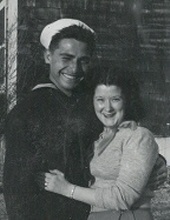 Franklin "Felix" E. Schneider, 85, of Sheboygan Falls, passed away peacefully on Saturday, February 17, 2018 at Woodland Manor. He was born October 9, 1932 in Milwaukee to John and Elenora (Goll) Schneider. Felix proudly joined the US Navy serving from 1951 to 1955 in Norfolk, VA. He was proud to serve along side 9 of his other brothers. On December 31, 1953 he was united in marriage to Sarah Lewis. Sarah preceded him in death on March 25, 2014. Felix work for K W Muth. For years he enjoyed showing his German Shorthair Pointers, he coached Little League, and loved building houses, fishing, and working in his yard.
Felix is survived by his two daughters, Nancy A. Schneider-Heiberger and Laurie B. Schneider, grandchildren, Chad A. (Kris) Heiberger and Tavis W. (JoAnn) Heiberger, great-grandchildren, Kyle A. Heiberger, Alex C. Heiberger, Lillian P. Heiberger, and Madison P. Heiberger, brother William Schneider, sisters Sandra Schneider and Sally Gorsege, and by many nieces, nephews, cousins, other relatives, and friends. He was preceded in death by his parents, wife, brothers; Robert, John, Earl, Donald, Theodore, Richard, Walter, and Ernest, and his sister; Beverly, Audrey, Phyllis, Sara, and Ruth.
Per Felix's wishes no services will be held.
The family would like to express their gratitude to the staff of Woodland Manor and Serenity Hospice for all their care, comfort, and support.

To order memorial trees or send flowers to the family in memory of Franklin Schneider, please visit our flower store.