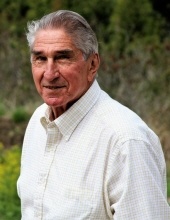 Frederick J. Weber, 87, of Sister Bay, is in the loving arms of his Lord and Savior following a brief illness. He passed from this world on Saturday, April 29, 2017.
Fred was born July 30, 1929, in Sheboygan to Fred and Anna (Kaiser) Weber. He attended Trinity Lutheran Grade School and was a 1947 graduate of Sheboygan Central High School.
On November 26, 1949, Fred was united in marriage to the love of his life and best friend, Hildegarde M. Hermann at Trinity Lutheran Church in Sheboygan. She preceded him in death on November 5, 2005.
During the course of their marriage they lived in many places including Idaho, Florida, and New Jersey. In 1956, they returned to Sheboygan and from 1966 to 1970, they resided in Ashland and Superior, where they were involved as foster parents and church youth group counselors. In 1970, they moved to Fond du Lac where they lived for 16 years. They then made their home in Sister Bay, an area that both Fred and Hildegarde loved.
Fred was an employee of Wisconsin Bell for 30 years, working his way up from lineman to the engineering department. After his retirement, Fred remained very active. He was a volunteer for the fire department, as well as a volunteer for the meals on wheels program. He enjoyed walking, snowmobiling, fishing, bowling, and spending time with family and friends.
Baseball was a common thread throughout Fred's entire life. He played with the Oshkosh Giants at the age of 18. In 1949, he played he played for the Sanford Giants near Orlando, Florida. When he was drafted in 1951, he played on the US Navy All Star Team. This year, on May 10, 2017, he was to be inducted into the Sheboygan County Baseball Hall of Fame. Due to his declining health, he was inducted on April 26, 2017.
Fred was a member of St. Paul Lutheran Church in Fish Creek. He was very active in the church, teaching Sunday school for many years. He played a large role in putting together the children's Christmas program, and truly enjoyed sharing his love of Jesus with the kids. Throughout the years, he made many dear friends there and received loving pastoral care from Pastors Michael Brecke and Frank Kauzlarich, and Lay Minister Gary Scharrig.
Fred is survived by his sister, Dorothy Matichich and brother-in-law, Leon Sanville; nephews, Mike Matichich, Mark Weber, and Ronald Weber Jr., Steve (Suki) Chvarak, Mike Chvarak, Tony (Linda) Chvarak, Jerry (Marna) Chvarak, Jim (Debbie) Chvarak, Tom (Lorie) Sanville, Ed Sanville, Bill Marske; nieces, Sharon Albright, Gloria (Tom) Zittel, Nancy Chvarak, Susan Gates, Kathy (Bryan) Grefsheim, and Amy Marske; numerous great-nieces and great-nephews; and his special "grandsons" Tom Abromaitis and Sam Hilpertshauser.
In addition to his parents and wife, he was preceded in death by his sister, Lilly Thiel; his brother, Ronald; his brothers-in-law Milford Thiel, John Matichich, and Harold Chvarak; sisters-in-law Arlisle Chvarak, Jean Sanville, and Mary Hermann; nieces Sandy Davis and Carol Endsley; and special "granddaughter" Jeanne Hilpertshauser. He is further survived by many dear friends and neighbors.
Family and friends are invited to celebrate Fred's life with a memorial service at 11 a.m. on Thursday, May 11, 2017, at St. Paul Lutheran Church, W4167 Juddville Rd, Fish Creek, WI. 54212, with Rev. Frank Kauzlarich officiating. A time of remembrance, fellowship and a meal will follow the service.
Fred's family would like to thank the staff at Door County Medical Center for the care they provided to him in his final days. They also would like to thank the caregivers who spent time in his home, along with neighbors and friends who were there for Fred throughout the years.
In lieu of flowers, memorials can be given in Fred's name to St. Paul Lutheran Church Youth Ministry in Fish Creek.
"Christ the hope of glory, living in us." Colossians 1:27
To sign the guestbook, please visit: www.ballhornchapels.com

Time of remembrance, fellowship and meal to follow the service.