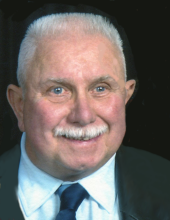 Howard Zeier, age 83, of Sheboygan passed away peacefully on Sunday, January 6, 2019 at his home surrounded by his loving family.
He was born in Sheboygan on September 4, 1935 to the late Henry and Hazel (Ellinger) Zeier-Kunstmann. Howard grew up in Kohler and enjoyed telling stories about his childhood. He loved to reminisce about the good times he had fishing, playing baseball and participating in other sports activities. He attended Central High School and at the age of 17 Howard joined the U.S. Navy. He was stationed in Rhode Island on the Samuel B Roberts DD 823. He proudly served four years during The Korean War and had many memories of his service seeing the world. He was honorably discharged in 1956 and began his life's work as a journeyman Sheetmetal worker. Howard retired in 1997 and for the last 15 years of his 40 years in the trade, he owned the former Stainless Steel Specialties Inc. in Gibbsville. Howard enjoyed bowling and especially golf, playing at many courses within Wisconsin.
On July 26, 1958 he was united in marriage to Harlean Hall at First Presbyterian Church in Sheboygan. Together they had two children, Amy Griffith and Andrew (Arely) Zeier; seven grandchildren, A.J., Sawyer, Lily, and Waylon Zeier, Catrin Griffith, and Citlaly and Isaiah Valdez.
Along with his wife of 61 years, Howard is further survived by a sister Linda (Tom) Chodak, a brother Larry Kunstmann. Nieces, nephews, cousins and friends further survive.
He was preceded in death by a son-in-law Hugh Griffith Jr., a sister-in-law DiAnn Kunstmann and a nephew Clint Kunstmann.
Private services will be held at a later date. Entombment will take place at Greenlawn Memorial Park.
A memorial fund has been established in Howard's name.
The family would like to personally thank the staff at St. Nicholas Home Health & Hospice for the compassion shown to Howard.

Event Information
Services are private.
To order memorial trees or send flowers to the family in memory of Howard Zeier, please visit our flower store.