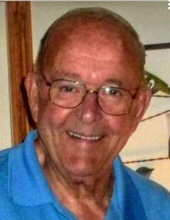 James Everett Owens, 78, of Sheboygan, WI passed away on September 21, 2019 at Aurora Medical Center, Sheboygan. He had been fighting cancer for quite some time, and with his family by his side, he died peacefully.
Jim was born May 1, 1941 in Ipswich, S.D, son of the late Lloyd and Velera Owens. He was a manager at Firestone in Aberdeen, S. D. until retiring and moving to Sheboygan to be with the love of his life, Marye. They were married on February 14, 2003 at the home of Marye's brother Randy in Cape Coral, Florida.
Jim was an avid Packer and Brewers fan, never missing a game. His real passion was decorating his home for every holiday. Many people would come back year after year just to see it. He also loved all his beautiful flowers and was very proud of his well-manicured lawn.
Jim is survived by 2 sons from his first marriage: Jason (Amy) Owens of MN and Wayne (Michelle) Owens and their children, Olivia, Sydney and Hayden, also of Minnesota. He is further survived by daughter Sally Hall (Sean) Olson and their daughter, Aubrey (Grandpa's buddy), sister Margaret Kelley of Oregon, brothers-in-law Randall (Diane) Rautmann and John (Beverly) Rautmann, both of Sheboygan, sisters-in-law Barb Owens and Eileen Owens, both of MN, numerous nieces and nephews, other relatives and friends.
Jim was preceded in death by his parents, brothers Darrell Owens and Bob Owens, sister Beverly (Rex) Gates, brother-in-law Bill Kelley and sister-in-law Barbara Anderkin.
Anyone that knew Jim knew he was the kindest man you'd ever meet, and would do anything for you. You'd just have to ask. He was the best husband ever. He loved spending time with granddaughter, Aubrey. He was so loved by all and will be missed so much. Rest in peace, Jimbo.
As per Jim's wishes, cremation has taken place and there will be no services. A memorial fund is being established in his name.

Event Information
Services are private.
To order memorial trees or send flowers to the family in memory of James Owens, please visit our flower store.