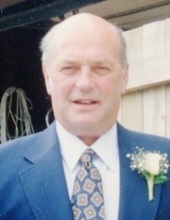 James E. Verhelst, 71, of Sheboygan, passed away at his home on Saturday, February 25, 2017, surrounded by his loving family. James was born June 2, 1945 in Sheboygan to John and Florence (nee DePagter) Verhelst. He attended schools in Sheboygan and graduated from South High School in 1963. He was employed by his father's company, Verhelst Construction in Sheboygan, which he later took over after his father's retirement. He then worked for Quasius Construction, Schreier Malting, and retired from The Sheboygan Glass Company in 2007.
Jim enjoyed his toys which were his four-wheelers, truck and motorcycle. What he enjoyed most was keeping them all clean. He also loved spending time in his shop building and fixing things. Above all, he enjoyed spending time with his family and friends.
James is survived by his son Pat (Debbie) Verhelst of Howards Grove, daughter Peggy (Jim) Fischer of Sheboygan, four grandchildren; Hannah, Gabrielle, Gaven, and Hailey, his brother Robert (Linda) Verhelst of Sheboygan, his sister Cheryl Roszak of Sheboygan, former wife and friend Diane (Gary) Wilkens, nieces, nephews, other relatives and friends. James was preceded in death by his parents, a brother Phillip Verhelst and a sister Rogene Guske.
Private family services will be held at a later date.
Jim's family would like to thank his brother Bob for being by his side through his illness and taking him to appointments, and spending time with him. They would like to thank his neighbors Dennis Petrauski and Don Baumann for taking care of his dog, Maggie, as well and coming over and spending time with him. Jim had many great friends that helped him out through his illness and visited him in the hospital, brought meals to him, and sat with him while in hospice at home. A special thanks to Peter (Debbie) Fischer, Bill Schlegel, Bill Westra, Richard Katte, and Donna and Karen from the Handle Bar; he always enjoyed your visits. The family would also like to express their gratitude to all of Jim's nursing caregivers, especially Theresa and Judy for their compassionate care. There were many more that came and visited him and they all are appreciated as well.

Event Information
Services are private.
To order memorial trees or send flowers to the family in memory of James Verhelst, please visit our flower store.