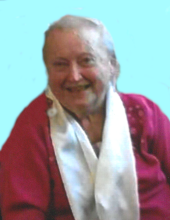 Janet E. Kaiser, 86, of Sheboygan, passed away on December 18, 2020 surrounded by her loving family, at Golden Harbor Assisted Living. She was born July 31, 1934 in Sheboygan to the late Frank and Wilma (Graskamp) Zillner. Janet attended Sheboygan Area Schools. On June 26, 1954 she was united in marriage to the love of her life LeRoy Kaiser. LeRoy preceded her in death on May 24, 1993.
Janet was a member of Our Savior Lutheran Church. Janet work for the Sheboygan Area School District in the Central District Building in the kitchen retiring in 1996. She then worked parttime at Piggly Wiggly on the southside for 10 years as a cashier and parttime at McDonalds for 3 years.
Janet was an avid bowler, bowling on the Wednesday Night Leagues. She enjoyed fishing, playing cards, and ceramics. Janet was an avid Packers and Brewers fan. Watching tennis and the game show channel was a favorite pastime of hers. Janet loved spending time with her family, especially watching her grandchildren play sports and other school activities.
Janet is survived by her three children: Terry Kaiser, Tammy (John) Kuitert, both of Sheboygan and Jim (Brenda) Kaiser of Howards Grove, by her four grandchildren: Erik (Special friend Sophia Parmenter) Kuitert of Fort Collins, CO, Kelly (Lino) Gonzalez of Joliet, IL, Lucas Kaiser and Ben Kaiser of Howards Grove, by great-granddaughter Elena Gonzalez of Joliet, IL, her brother Jerry Zillner and sister Judy Stockel. She is further survived by nieces, nephews, other relatives and friends. She was preceded in death by her husband, parents, mother and father-in-law, brother John Zillner, sister Joan (Steve) Pentek, and brother-in-law Richard Stockel.
Due to the Covid-19 restrictions, a private family funeral service will be held on Wednesday, December 23, 2020 Ballhorn Chapels Funeral & Cremation Care Center, 1201 N. 8th St., Sheboygan with Pastor Jim Schulz officiating. Burial will follow at Greenlawn Memorial Park in Kohler.
The service will be livestreamed on Wednesday, December 23, 2020 at 2:00PM on Janet's obituary page on the Ballhorn Chapels Website. To join the family, click on the obituary and events tab, click read more, and scroll down to the bottom of the obituary. If you are not able to join us for the service, it will be recorded and available on the website afterwards.

In lieu of flowers memorials may be made to Our Savior Lutheran Church in Janet's name.
The family would like to thank the staff at Community Care, Golden Harbor, and Allay Hospice for all their loving care.

To order memorial trees or send flowers to the family in memory of Janet Kaiser, please visit our flower store.