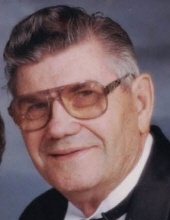 J.C. Horton, age 91, passed away peacefully Wednesday, June 28, 2017. He was born in Oklahoma on December 16, 1925 to the late James and Ada Horton. J.C. served in the U.S. Navy for 21 years. Following his military service, he began working at Kohler Company in the maintenance department until retiring in 1997. He was a member of VFW Post 9156, where he was in the quarter century club. He enjoyed fishing, tinkering in the garage, and movies.
J.C. is survived by his 3 children: Amy (Somkhith) Neuaone of Sheboygan, James Horton of Brillion, and Jaye Agerton of Panama City, FL; 5 step-children: Keith Bell, Lorrie (Martin) Ruiz, Scott Bridges, Terri Hoerth, and John (Chris) Bridges; grandchildren: Sierra, Noah, and Gavin Horton; Nicole Kraus; Maria Sanchez, Marcos Ruiz, Christina Ruiz, and Matthew Ruiz; Meghan and Katelin Bridges; Jessica Schrage and Casey Hoerth; Emily and Zachary Bridges; Sarah, Aaron, Alyssa, and Christopher Bell. Further survived by numerous great-grandchildren and other relatives.
J.C. was preceded in death by his parents, his wife Mary Ann Horton and step-son, Jeff Bell.
Private services will be held at a later date.
The family would like to thank the staff at Sheboygan Senior Community for their wonderful care of J.C.
In lieu of flowers, a memorial fund has been established for the Sheboygan County Veterans Memorial in J.C. Horton's name.
"He never looks for praises, He's never one to boast. He just goes on quietly working for those he loves the most. His dreams are seldom spoken, his wants are very few. And most of the time his worries will go unspoken too. He's there... A firm foundation through all our storms of life. A sturdy hand to hold to in times of stress and strife. A true friend we can turn to when times are good or bad. One of the greatest blessings, the man that we call dad." Poem written by Karen K. Boyer

To order memorial trees or send flowers to the family in memory of J.C. Horton, please visit our flower store.