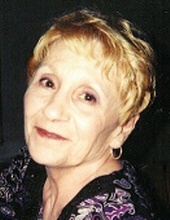 Joan Meyer, 78, of Pine Haven Christian Home in Sheboygan Falls, returned to the Lord August 25, 2020.
She was born to the late Richard Bauer and Irene Gensch, August 10, 1942, in Sheboygan. She married the late Kenneth Meyer in 1963, and they lived together in Sheboygan for 11 years before moving to Sheboygan Falls.
Joan was a resident of Sheboygan Falls for 41 years, the first 25 with her late husband. Joan and Ken were business owners in Sheboygan Falls from 1986 to 1999. First with a "home cooking restaurant", "Falls Streetcar Station". And then a country crafts shop, "Needle In A Haystack", where Ken and Joan worked side by side doing what they loved; creating with their hands. Joan loved her family and friends very much and leaves behind many beautiful memories.
Joan is survived by two children; Kurt Meyer of Sheboygan and Karrie March of TN. She is also survived by three grandchildren; Amber and Kayleigh of Sheboygan and Shae of TN, and by two sisters; Jane her best friend and Candis and one brother David all of Sheboygan, she is further survived by nieces, nephews, other relatives and friends. Joan was preceded in death by her loving husband and love of her life in 1999.
There will be a private ceremony for the scattering of her cremains.
The family would like to express their gratitude to the staff of Pine Haven Christian Home and Sharon S. Richardson Community Hospice for all their care, compassion and support.

To order memorial trees or send flowers to the family in memory of Joan Meyer, please visit our flower store.