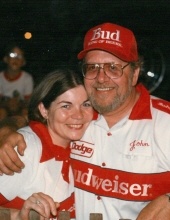 The Fort is closed, and the Lang Gang is disbanded. John Lang crossed the finish line on Saturday, January 25, his wife Ginny by his side, as always, after a valiant battle with pancreatic cancer.

John was born in Sheboygan to Mary and Frederick Lang on May 21,1938. In 1977, he married his devoted and loving wife Virginia Bertschy with whom he shared more than 42 wonderful years and many adventures.

John worked at K.W. Muth Company for 23 years. In 1994 he started his own trucking business, John Lang Express, and drove long haul throughout the lower 48 states and Canada until his retirement in 2003.

A lifelong drag racing and car enthusiast, John was a member of the National Hot Rod Association (NHRA) and competed in Super Stock and Stock Eliminator at the national level holding track championships at Wisconsin International Speedway in Kaukauna and Great Lakes Dragaway in Union Grove. John and Ginny spent many weekends traveling to tracks around the country in their RV to compete in races, one night even sleeping on the starting line.

John was a big guy with an even bigger heart, a wicked sense of humor and a generous spirit. He made friends wherever he went and always arrived home with an entertaining story to tell. He ran into Willie Nelson at a favorite truck stop and the two ate lunch together. At an auto parts store John met Bob Seger and they bonded over their love of '64 Plymouths. He also met Prince when he hauled equipment to Paisley Park.

If he wasn't racing or on the road, John could be found at his garage, affectionately known as "The Fort," a gathering place for his many friends who would spend their time tinkering on his many hot rods. One of his greatest pleasures was going out for breakfast and he was a fixture at many local area restaurants, truck stops and his neighborhood McDonald's. John was very proud of his German heritage and was an honorary member of The Bavarian Club. A veteran, he served in the United States Air Force from 1956 to 1958 as an aircraft maintenance specialist working on B-52 bombers.

A visitation to celebrate John's life will be held at First United Lutheran Church, 2401 Kohler Memorial Dr, on Monday, February 3. Visitation begins at 10 a.m. followed by a service at noon. In lieu of flowers a memorial fund is being established.

"Yes, I think to myself, what a wonderful world. Oh yeah." Louis Armstrong.