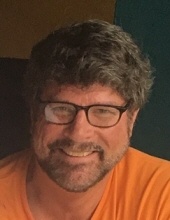 Joseph P. Ross, age 56, of Sheboygan, passed away unexpectedly on Monday, March 12, 2018 at his home.
Joseph was born in Sheboygan on March 9, 1962, to Robert Sr. and Mary (Van Vleet) Ross. He was born on her 30th birthday and for that reason he and his mother shared a special bond! Joseph attended local public schools and graduated from Sheboygan South High School. He attended enough years in college to have earned two degrees, but never cared to make one official. His education truly was worldly. From travels to Israel and Ecuador, to the East and West coasts of the USA, to Cocoa Beach of course, and many other parts of the sunshine state.
He was an amazing individual, traveler, forward and out of the box thinker. He lived without borders and the world was truly his oyster. He was young at heart and mind. He had great faith and was always willing to discuss that with vigor. He challenged all of us in many ways and for that we will dearly miss him. He loved all people but had a special place in his heart for children. We always thought it was because a part of him never wanted to grow up. Everyone will miss you son, brother, friend, uncle, father to many.
He is survived by his mother, Mary of Green Bay, WI; four brothers, Robert (Cindy) of Brussels, WI, John of Sheboygan, Paul and Chris both of Vero Beach, FL; sister, Jennifer (William) of Apex, NC; along with many other relatives and friends. Joseph was preceded in death by his father, Robert Ross Sr.
A Celebration of Life for Joseph will take place on Wednesday, April 18, 2018 at The Sheboygan Yacht Club, 214 Pennsylvania Ave, Sheboygan, from 3 PM until 6 PM. Joseph will be laid to rest at Marion Cemetery in Waushara Co, WI.
In lieu of flowers, memorials in Joseph's name may be directed to Mary Ross, PO Box 317 Sturgeon Bay, WI 54235-0317.