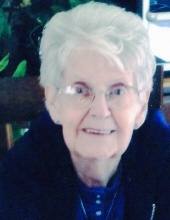 LaVerne Mary (Maurer) Anderson, age 89 of Sheboygan, died on February 18, 2017 at Aurora Sheboygan Memorial Medical Center after a brief illness.
She was born in Sheboygan on August 10, 1927 to the late Joseph and Rose (Zimmerman) Maurer.
LaVerne was a resident of Sheboygan her entire life. She was currently living at Terrace
Place in Sheboygan. She attended St. Dominic grade school and North High. Currently she was a member of Holy Name of Jesus Catholic Parish. She worked at the Wisconsin Telephone Company as an operator and at Bemis Mfg. Company. In 1946 she married William Anderson in Sheboygan. He preceded her in death in 2003.
Survivors include her son Rev. Michael Anderson (Joyce) of Chandler, Arizona, and daughter Julie Kalk (Roger) of Sheboygan. She is also survived by six grandchildren, Amy Kalk, Rebecca (Ryan) Anderson, and William (Kelly) Kalk all of Sheboygan.
Her Arizona family includes grandsons, Scott Anderson of Long Island New York, Patrick (Virginia) Anderson of Mesa, Arizona and Jonathan (Camille) Anderson of Ahwatukee, Arizona.
Great-Grandchildren Isaac Anderson of Sheboygan, Dante and Marina Anderson ofAhwatukee, Arizona, Amanda (Justin) Kelsey of Irvine, California, Anjelika Anderson of Mesa, Arizona. Great-Great Grandchildren MiKayla and Azriella Kelsey of Irvine, California. She is also survived by her sister-in-law Eileen Maurer, cousin LeRoy Kellner, and many nieces, nephews and special friends.
LaVerne was preceded in death by her husband, son Patrick Anderson, great-grandson Noah Anderson, brother Stan Maurer and sister Jane Schobert.
A service of celebration of life will be held Thursday, February 23, 2017 at 2:00 p.m. at Balllhorn Funeral Chapels. Rev. Matt Widder, Pastor at Holy Name of Jesus Catholic Church, will officiate. A time of visitation and support will be held from 1:00 p.m. until the time of service. Burial will take place at Calvary Cemetery.
LaVerne's family would like to extend a heartfelt thank you to the staff at Terrace Place for their love and care.
To sign the guestbook, please visit www.ballhornchapels.com