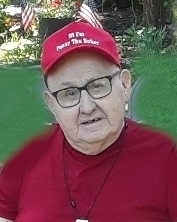 Leroy V. Jackett age 81 passed away on Wednesday February 23, 2022, from complications after suffering a stroke in November.  Family and friends always knew him as “Fuzzy the Baker from West Side Bakery” “where he was always up to his elbows in money, well dough” as he called it.

Fuzzy was born the youngest of 10 children to Joseph Sr. and Amalia Richter Jackett (Jacquette) on August 14, 1940, at St. Nicholas Hospital, Sheboygan.  He attended grade School at Trinity Lutheran Church until he graduated from 8th grade.

He started working at City Bakery while attending Vocational school learning the ins and outs of the business, achieving the title of “Master Baker”. At the time, an honor only a few people accomplished.  Fuzzy took a brief leave of absence to go into the Army Reserves.   Upon his return he bought West Side Bakery in 1964.  Fuzzy married Judith M. Schultz on October 2, 1965, at St. Peter Ev. Lutheran Church, Hilbert, WI.  They had 2 children, Jason, and Rebecca.  Judy died May 4, 1986.  Fuzzy married Donna M. Hocevar, on December 27, 1986, at Wesley United Methodist Church, Sheboygan.  Donna died July 24, 2018.

As the new owner of the bakery, Fuzzy continued the job of making delicious, donuts, pastries, hard rolls, breads, cookies, cakes. For a time, Judy helped by decorating wedding and birthday cakes.  Oh so many mouth-watering memories.  “Fuzzy the Baker” baked for 51 years at which time his son Jason took over the business. In 2021 Fuzzy’s long time employee Phil took over as owner, following Jason’s passing.

In his younger years Fuzzy was active in and loved to play baseball, softball, football, and any other kind of sports with the kids and friends in the alley behind Superior Ave. As a young man Fuzzy also played on teams through the Sheboygan Rec. Dept.  He was a good player no matter what the sport.  After he stopped playing sports, he sponsored teams throughout Sheboygan, including Jason’s bowling team.  Fuzzy loved to watch the Packers, Brewers, and Jason’s favorite team the Reskins every week on TV during the seasons.   Sometimes both Brewers and Packers on the same day.

Inurnment will take place on Tuesday, June 7, 2022, at 1:00PM at Woodland Cemetery in Kohler, with Rev. John Berg officiating.

In place of flowers, memorials to LeRoy Jackett Memorial fund would be appreciated, they will be distributed between the Sheboygan A's, Meals on Wheels, and St. Vincent DePaul.   Please make checks out to:  Janice Olig or Leroy Jackett Memorial.

Fuzzy’s family would like to Thank the Nurses and Doctors who cared for him at Memorial Hospital during his stays.  We would also like to Thank the Nursing and Therapy Staffs at Pine Haven Nursing Home for the great care and compassion they gave Fuzzy.  Thank you to the members and Pastors of his church who came to visit him and kept him in their prayers.

Fuzzy The Baker will be missed by so many who knew him over more than 50 years of owning West Side Bakery.  Family, neighbors, customers, friends, teammates, mostly anyone he met were left with fond and often funny memories.

May the dough rise up to meet you,

May your buns always be perfect,

May there always be custard in the éclair’s and

Cream in the long john’s

And my you watch over y our family, friends, and customers in Heaven

With the same smile that kept them coming back every day.

We will all miss you.

To order memorial trees or send flowers to the family in memory of LeRoy "Fuzzy the Baker" Jackett, please visit our flower store.