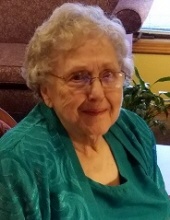 Lois C. Ferguson, age 89, of Sheboygan, died on Thursday, April 9, 2020, at Sheboygan Health Services. She was born in Marinette, WI on May 28, 1930, the daughter of the late Lawrence and Myrtle (Trueblood) Miller.
Lois grew up in Gladstone, MI and Marinette, WI. On June 10, 1948, she was united in marriage to Steve Ferguson.
Lois was a homemaker and stay-at-home Mom to her six children. She was a self-taught artist and excellent seamstress. She also enjoyed baking and all kinds of needlework. Lois enjoyed getting together with family and especially spending time with the grandkids. She delighted in telling and re-telling all the things the little ones said or did. One of her favorite sayings was, "what do people without kids do?" Lois was a selfless caregiver to Steve when he became ill and missed him dearly after he passed in 1997.
In her later years, she enjoyed making and selling crafts and jewelry and occasional trips to the casinos. Lois suffered from dementia the last couple of years and desperately wanted to go home even though she couldn't remember where that was. Throughout this time, she still gave the family many wonderful memories and would always remind them to greet everyone at the end of a visit.
Lois is survived by daughters Mary Lou (Robert) Peters of Howards Grove, Karen (William) Renk of Plymouth, Lisa (Randall) Schultz of Sheboygan; son Steve (Lisa) Ferguson of Sheboygan; grandchildren Jason (Sara) Peters, Paul (special friend Angie Keener) Peters, David Peters, Will Renk (fiancé Cole LaPlant), Patti (Kyle) Pottratz, Robin Otte, Chrissy (Travis) Kraus, Bobbi (Kevin) Martin, Stacy (James) Meyer, Jessica (fiancé Kerry McLaughlin) Schultz, Steve Ferguson, Kelly Ferguson; and 22 great-grandchildren.
She is further survived by sisters, Janet Beaudry and Beverly Uecke; sister and brother-in-law, Mary and Bill Weinschrott; brothers-in law Louie Ferguson, Sam Ferguson, and many nieces and nephews.
Besides her parents and husband Steve, she was preceded in death by daughters Sandra Ferguson, Rebecca Jensen; sister Arleen Langer; brothers Thomas Miller and Loren Miller; sisters and brothers-in-law, Robert Beaudry, Leo and Ann Filler, John and Pierina Ferguson, Nick Ferguson, Dan and Charlotte Ferguson, George and Mae Ferguson, Flo Ferguson, and Betty Ferguson.
The family wishes to extend heart-felt thanks to the entire staff at Sheboygan Health Services for all their care, especially to Marcia who kept them informed during the past weeks of visitor restrictions. They were very touched that Marcia was with Lois during her final moments.
Greet everyone for us Mom and rest in peace. You're home now.
Services will be held at a later date.
Please continue to check back for service date and times.

To order memorial trees or send flowers to the family in memory of Lois Ferguson, please visit our flower store.