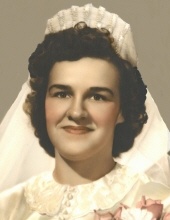 Lucille A. Goetsch, age 95, of Sheboygan went to be with her Lord on Saturday, September 8, 2018.
She was born in Manitowoc, WI on March 14, 1923 to the late Joseph and Rose (Witczak) Berger. She attended local schools. Lucille worked for Schmidtman Supply Store prior to her marriage. She was united in marriage to Willard Goetsch on February 18, 1950 at St. Mary's Catholic Church in Manitowoc. He preceded her in death on November 7, 2003. Lucille was a member of St. Dominic Catholic Church in Sheboygan.
Lucille found joy in knitting, cooking/baking, word puzzles, reading and cheering on her Wisconsin sports teams. She also enjoyed raising her children, they were her pride and joy. She adored her grandchildren. They could always put a smile on her face.
Lucille is survived by her children, Tony (Sandy), Judy , David, Tom and Bill; grandchildren, Dustin, Jesse, Crystal (Jamie Zube) and Tracy and a sister Dorothy Gintner of Manitowoc. Other friends and family further survive.
Along with her husband, Willard, she was preceded in death by two grandsons Kevin and Eric Goetsch; sister Caroline and a brother Clarence.
A private service will be held at a later date. Entombment will take place at Calvary Cemetery.
In lieu of flowers, a memorial fund has been established in Lucille's name.
The family would like to thank the Sheboygan Fire Department and the first responders for their immediate care given to mom.

Event Information
Services are private.
To order memorial trees or send flowers to the family in memory of Lucille Goetsch, please visit our flower store.