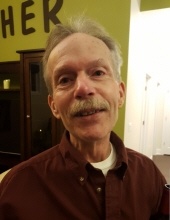 Heaven's band gained a new guitarist with the unexpected passing of Mark Bowser on November 4, 2019. In life, Mark was an avid guitarist even writing lyrics and music for his own, original songs. He was interested in music of all kinds from folk to jazz.

Mark was also passionate about nature. He kayaked frequently in the Sheboygan River and walked at least once a day in his own neighborhood, in Pine Woods and in Maywoods. During his many walks, he picked up and properly disposed of the trash that others had carelessly thrown out so that it would no longer spoil the ecosystem.

Mark graduated from North High in Sheboygan and completed his bachelor's degree at the University of Wisconsin. He was employed at Sheboygan County Woodworking and Toro prior to his retirement. He was a good mechanic and woodworker and was able to fix just about anything.

Mark was one of four children born to Joseph and Marion Hintz Bowser. He was a kind and thoughtful son who took care of his (then) widowed father in his old age. He was a wonderful brother to his siblings. Mark was a gregarious, friendly man who never met a stranger that he couldn't find something about which to talk. Although sociable, he gave his true friendship carefully. But, once given, the friendships lasted a lifetime.

Mark's was predeceased by his mother, father and youngest brother, Tim. He is survived by his sister, Cheryl Bowser Petersen, J.D., Ph.D., his brother-in-law, Robert Petersen, Ph.D., his brother and sister-in-law, Tom and Heather Bowser, two nephews, Brian and Brandon, a niece, Shaylene, five great nieces, one great nephew, many cousins, aunts and uncles in his big, loving extended family and some very special friends including Mike and Joy Johnston, Mark and Julie Oleson and Tom Roth.

In lieu of flowers, please consider making a donation to Maywood Environmental Park (https://www.gomaywood.org/). A luncheon for family and close friends will follow the memorial mass.