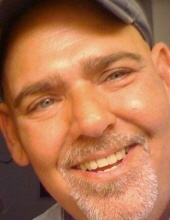 Michael H. "Mick" Allen, of Sheboygan, passed away Monday evening, August 26, 2019 at Aurora Sheboygan Memorial Medical Center after a lengthy and courageous battle with health issues. He was 58 years old.
Mick was born August 4, 1961 in Antigo, the son of Irwin and Viola (nee Wheeler) Allen. He attended school in Sheboygan, graduating from North High School in 1979. Out of high school, Mick worked as a chef at Rupp's Lodge for many years. In the late 1980's, he moved to Milwaukee, and was employed at Firebrick Engineers, retiring from there as a production manager.
A self-taught musician, Mick played numerous string instruments, occasionally joining local bands in jam sessions. He enjoyed traveling, and lived in many states, making friends wherever he went. He loved the arts, especially painting and pottery. He will be remembered for always helping those less fortunate, donating his time and cooking expertise at food pantries and non profit fundraising events. He was a legendary story teller (some true, and some not), which resulted in much laughter.
Mick is survived by his siblings: Judy Schneekloth of Philadelphia, PA, Barb (Norman) Fitch of Burlington, WI, Kathy (Guy) Edwards of Chippewa Falls, WI, Irwin "Skip" (Linda) Allen of Reading, PA and Mark (Lori) Allen of Sturgeon Bay, WI. He is further survived by brother-in-law Steve Hicks of Sheboygan, numerous nieces and nephews and countless friends. He is preceded in death by his parents, his sister Martha Hicks and brother-in-law Chet Jastrzebski.
A Celebration of Mick's Life is being held from 12:00 noon - 4:00 PM on Sunday, September 22, 2019 at Deland Park shelter in Sheboygan.