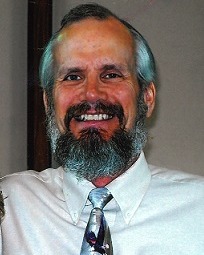 He was born April 5, 1956 in Ft. Myers, FL to Raymond and Louise E. (Lauff) Wilson, where they resided until 1963.  After living seven years in Chicago, the family relocated to Sheboygan in 1970.  While here, he attended Farnsworth Middle School and South High where he played varsity football.  Upon graduating in 1974, he enlisted in the US Navy and served on the USS John King.  After completing his military duty in 1977, he attended LTC and received an accounting degree.  After working for Heritage Insurance and other companies for several years, he left the work place to begin his journey to serve the Lord.  He became an ordained minister and has been the Apostle Pastor at Ministry of Peace since 1992.  On December 31, 1993, he was united in marriage to Shirley Zima, in Sheboygan.  As a Christian team, they shared the gospel here and abroad including many mission trips overseas.  By preaching God’s word and gaining souls for Christ, God blessed their outreach with numerous ministries in Africa, India, China, Pakistan, The Philippines, South Korea, The United Kingdom, and the U.S. over the next 30 years!

He also enjoyed hunting, fishing, and the great outdoors, especially with his faithful companion “Dutchess”.

He is survived by his wife of 28 years, Shirley; step-sons, Joe and Eddie Staudinger; step-grandson, Kyle, all of whom he regarded as his own.  Other family members include a brother Steve (Sue) Wilson and a sister Cheryl Eggen, both of Sheboygan and a sister Audrey (Avraham) Bercovice of Chicago.  And lastly, he is survived by several nieces, nephews, and many “brothers and sisters in the Lord” worldwide.

He was preceded in death by his grandparents, parents, a brother Daniel, a step-son Steven Staudinger and a brother-in-law Michael Eggen.

A Funeral Service for Michael will be held at 3:00 PM on Friday, December 30, 2022, at Ballhorn Chapels Funeral and Cremation Care Center, 1201 N 8th St. in Sheboygan with Elder Rick Eigenberger officiating.  Family will greet visitors on Friday at the funeral home from 2:00 PM until the time of the service.  If you are unable to join the family to attend the service, please visit his obituary page on the funeral home website, www.ballhornchapels.com to view it virtually.

In lieu of flowers, a memorial fund has been established in Michael’s name.

The family would like to thank the many ministries for their support and prayers during this difficult time.  Special appreciation and gratitude must be given to his niece, Terri Wacha for the countless hours coordinating travel arrangements, medical care, and dealing with the doctors on a daily basis during his hospital stay.  Also, great thanks goes out to Rick Eigenberger for his bedside companionship these past several weeks and to Eddie for traveling with his mother so she could be with her husband.  God bless all of you for your time and labor of love.  We know it meant a lot to him.

To leave an online condolence for the family please visit www.ballhornchapels.com

Michael touched many lives over the years, and will be deeply missed by all who knew him.

To order memorial trees or send flowers to the family in memory of Michael John Wilson, please visit our flower store.