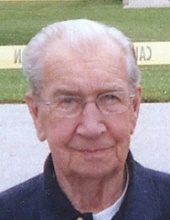 Norbert "Norb" J. Schreiber, age 95, passed away at Harvest Homes in Howards Grove on June 2, 2018, surrounded by love.
Norb was born on May 31, 1923 in Kiel to Alvin and Margaret Schreiber. He graduated from Kiel High School and soon after joined the US Army, serving in the European Theater during and through the end of WWII. He then attended the Milwaukee School of Engineering.
Norb's first career was as a journeyman electrician in the Kiel and Sheboygan area for 14 years. He then attended Stout University to obtain his teaching credits and for the next 24 years, traveled Wisconsin instructing apprentice electricians in the vocational system for the State of Wisconsin.
After his retirement in 1987, he seriously took up his next career of "golfing", scoring a hole in one during league play at the Quit Qui Oc course in Elkhart Lake.
On October 23, 1987, Norb married Virginia Klein Opgenorth at Hope Reformed Church.
Norb was a longtime member of Zion Covenant Church as well as a member of the IBEW local 494, International Brotherhood of Electrical Workers for 67 years. During retirement, he enjoyed many 1st Thursday lunches with fellow electricians.
Norb and Ginny were members of People to People International, Sheboygan Chapter, for 30 years, traveling with the group on international "home stays" and exchanges.
Norb belonged to Oostburg American Legion Post 286. On May 2, 2010, he was privilege to go on the Stars and Stripes Honor Flight to Washington DC to visit the WWII Memorial.
Norb and Ginny also spent many vacations traveling across the US, attending University sponsored week-long Road Scholar learning experiences.
Norb is survived by his wife Ginny and his sons: Jan (Marlene) Schreiber, Dirk (Brenda) Schreiber and Jay (Jody) Schreiber and his grandchildren: Curtiss Schreiber, Leah (Justin) Mourlam and their children Alayna and Dax, Jacob Schreiber, Jon Schreiber, Jessica Schreiber and Alex Mueller. He is further survived by his first wife Karin Schreiber, his twin brother Herb Schreiber, sister Marion Kuether and younger brother Al (Fran) Schreiber, the Klein family, and many friends.
Norb is also survived by Ginny's children: Scott Opgenorth, Dave (Mary Jo) Opgenorth and Tom (Nancy) Opgenorth. He was a loving Grandpa "Norb" to their children: Jessica Hoffman and Brian Woveras and their children Ellis and Evy, Kari Opgenorth, Jamon (Kelle) Opgenorth and their daughters Reagan and another little girl to be born this summer, Brooke (Ryan) Retherford and their son Beckham, and Jared (special friend Rachael Moriarity) and his daughter Scout.
Norb was preceded on his eternal journey by his older brother Wilfred "Scrip" (Jeri) Schreiber, brother-in-law Milton Kuether and sister-in-law Amy Schreiber.
A Memorial Service will be held at 4:00PM on Friday, June 8, 2018 at Ballhorn Chapels Funeral and Cremation Care Center, 1201 N. 8th St. in Sheboygan with Pastor Donna Van Orden officiating. The family will receive visitors at the funeral home on Friday from 2:00-4:00PM.

In lieu of flowers, memorials are suggested to a charity of your choice.

Dear family and friends,
Many thanks to you all - Al Loth who helped Norb put puzzles together every Tuesday morning, Dale Voss who helped Norb continue to enjoy his love for Big Band music, Wayne O., Wayne and Alice for their frequent visits, and most especially Pastor Donna of Hope Reformed Church for her kindness and comfort she showed Norb and others at Harvest Homes.
And to everyone at Harvest Homes - you are the best. You made a happy home for Norb. Angie who stayed with Norb and me, day and night, for his last five days, Beth, Rachael, Jane, Kayla for helping Norb taste his birthday cake, Michelle, Lori, Lisa, Leslie, Jenna, Amanda Lynn, Heartland Hospice and many others. Love to all--Ginny.