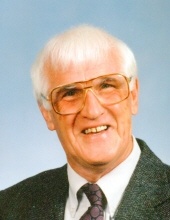 Orville was born June 8, 1932 in Monroe, MI, the son of Albert and Mattie (nee Hughes) Pruitt. He attended Lincoln grade school and Monroe High School. He proudly served his country in the Air Borne Division of the United States Army during the Korean conflict from 1950-1953. He was discharged in July 1953. In 2014, Orville was honored to attend the Stars and Stripes Honor Flight with his son, Richard.

After Orville's return from the Army, he played semi-pro football for the Sheboygan Redwings.

He met his wife Helen M. Boone while stationed at Camp Haven in Haven. They were united in marriage on November 6, 1953 at First Christian Reformed Church in Sheboygan.

For 11 years, Orville worked at Sheboygan Paper Box and Specialty Co. He later worked at Plenco Plastics Engineering for over 33 years, retiring in April of 1997.

Orville was proud of his 22 gallon blood donation to the American Red Cross.

Orville was a member of Christ Community Church, formerly First Christian Reformed, where he served as an usher and was active on the building committee for many years.

Orville is survived by his wife of 63 years, Helen and their children: William (friend Anne) of Oostburg, Richard (Denise) of Green Bay and Patricia Jeltema of Spring Lake, MI. He is further survived by two granddaughters: Amber (Issac) Schanno and Lauren (Alex) Hastings, great-grandchildren Arianna and Oliver, nieces, nephews, other relatives and friends.
He is preceded in death by his parents, daughter-in-law Sheri Pruitt, 5 brothers and 6 sisters.


A Memorial Service will be held at 12 noon on Monday, February 6, 2017 at Christ Community Church, 428 Geele Ave. in Sheboygan. Pastor Pat Hennen will officiate. The family will receive visitors at the church on Monday from 11 a.m. until 12 noon.

In lieu of flowers, memorials are suggested to Christ Community Church.