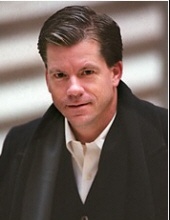 Andy was born January 22, 1960, in Sheboygan, the first son of Otto Henry Jung and Eleanor A. Jung. He was proud to be the fourth generation of his family to carry the name Otto Jung.

Andy attended Grant Elementary and Urban Junior High Schools and graduated from North High School in 1978. While in high school Andy demonstrated his early interest in marketing by working part time in the Toy Department at Prange-Way. It was here he mastered the art of tying a necktie to perfection.

In 1983 Andy graduated from Miami University in Oxford, Ohio, his parents' alma mater, earning a Bachelor of Science degree in the Farmer School of Business. He was a member of the Alpha Chapter of Beta Theta Pi, having followed in his father's footsteps.

During summer months while in college Andy worked at the Jung Shoe Manufacturing Company, the family business founded by his great-grandfather Otto Jung and great-uncle Henry Jung. One summer he was employed at Johnsonville.

Andy and Heidi Bremer were united in marriage December 3, 1988. They became the proud parents of two beautiful children - Claire and Andrew. The marriage later ended in divorce.

Andy's professional career began at Western Publishing where he promoted the Little Golden Books. He then took a position at Kellogg as Senior Director of Advertising and Media and was proud to have been part of the team that launched Raisin Bran Crunch. After leaving Kellogg, Andy was named Executive Vice President and Chief Marketing Officer for the Association of Magazine Media. Most recently Andy was Media Director, Global Marketing Communications, for the Scott's Miracle-Gro Company.

Andy Jung will be remembered for his congenial, friendly, fun-loving nature. With a warm smile and ready conversation he made friends readily and easily and deeply cherished his many long-term friendships, especially those from many summers at his beloved Elkhart Lake.

A memorial service will be held on Wednesday, August 28, 2019, at 11:00 A.M. at St. Luke United Methodist Church, 623 Ontario Avenue, Sheboygan. Visitation will be from 9:00 A.M. until the time of service. In lieu of flowers, contributions are welcome for the Elkhart Lake Improvement Association, Post Office Box 725, Elkhart Lake, WI 53020.

The family thanks the Sheboygan County Sheriff's Department and the Elkhart Lake Police.