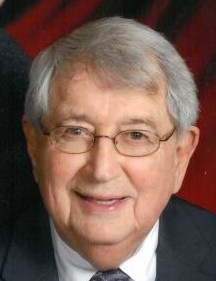 Otto Henry Jung of Sheboygan and Elkhart Lake passed away on Wednesday, August 19, 2020, at the Sharon S. Richardson Community Hospice. He was 87.

The cause of death was complications from a fall precipitated by cardiac arrest.

Otto Henry, the first of four children of Otto Alfred and Silvia Vande Loo Jung, was born July 23, 1933, in Sheboygan.

He attended Lincoln Elementary School and graduated from Central High School in 1951. He participated in golf, intramural basketball and football, and All School Night. Henry maintained his high school friendships through his lifetime, and in recent years thoroughly enjoyed helping coordinate several class reunions.

At Miami University in Oxford, Ohio, Henry earned his B.S. degree in Economics from the School of Business, graduating in 1955. He played varsity golf and was a member of the Alpha Chapter of Beta Theta Pi, serving as fraternity treasurer. In his senior year at Miami, Henry became engaged to Eleanor Andrews.


Following graduation Henry volunteered for the draft and joined the U S. Army. He served in Korea from 1955-1957. He took advantage of his location in the world and used his furloughs to visit several countries in the Far East, as well as Australia during the 1956 Olympics. His golf coach at Miami had a role in that event and provided Henry with an official participant's jacket, enabling him easy access to events.


On June 15, 1957, Otto Henry Jung and Eleanor Andrews were married at Lakewood Congregational Church in Lakewood, Ohio. When two Miami graduates wed, they become a Miami Merger. They settled in Sheboygan and began their lives together, soon becoming part of the life of their community.


They were blessed with two sons - Otto Andrew Jung and Thomas John Jung. Their lives as a family were enriched by the schools they attended, First Methodist church, the YMCA, and the John Michael Kohler Arts Center.


Henry joined his father and uncle, Edgar Jung, at the Jung Shoe Manufacturing Co. where he led the Sales Department. He was named president upon the death of his father. His leadership in the shoe business extended beyond Sheboygan; he served as Director and Regional Vice President of the Footwear Industries of America, and Chairman of an International Footwear Manufacturing Conference.


Henry was a lifelong member of St. Luke United Methodist Church. He served in many leadership positions - chairing the Council of Ministries, Finance Committee, and Administrative Board; he served on the Stewardship Committee for 28 years and led three very successful fund-raising campaigns. More recently Henry was especially pleased to research and oversee the preservation of the stained-glass windows.


He served on the United Way Board of Directors as president, was chairman of the 1972 County Campaign and served on their capital development committee for the new building in 1979. Both campaigns exceeded stated goals. Henry was awarded the Sheboygan County Lifetime Volunteer award sponsored by the United Way in 2018.


Henry chaired the Capital Development Campaign in 1980 for the Sheboygan Rehabilitation Center and served on their Board of Directors. He was a Director for their Endowment. The Jung Shoe Mfg. Co. was one of the first local industries to hire the Rehabilitation Center clients for special contract jobs.


After the sale and eventual closing of the Jung Shoe Mfg. Co., Henry turned to his alma mater, Miami University, and joined their Development Office as Director of University Gifts. From 1985-1998 he traveled extensively calling on alumni and organizing events. He was a director of the university's Business Advisory Council. He retired in 1998 and returned to Sheboygan.


It did not take long for Henry to re-engage and re-connect to his hometown. He served briefly as a consultant at Lakeland College, then turned his attention to the YMCA and joined the staff in 2000 as Director of Development, serving in that capacity until his third retirement in 2019.


Henry's connection to the Y began when he was seven years old and lived in the neighborhood of the "old Y" at 7th and Ontario. As newlyweds he and his wife were advisors to the Tri Hi-Y group, overseeing Friday night dances at the Y Dugout. He was a long-time member of the Sheboygan Y's Men's Club, and established lifelong friendships with the men who gathered weekly over dinner at the Y, planning projects like broom sales and Christmas tree sales to benefit the Y.


Henry's respect and appreciation for family and community history ran deep. He grew up surrounded by family traditions and aunts and uncles and cousins, all descended from great-grandfather Jacob Jung who had emigrated from Germany to Sheboygan in 1852.

The Sheboygan County Historical Museum invited him to join their Board. He served as president and focused on his special interest - programs. He introduced and developed the successful Third Saturday series which brought many new visitors to the Museum.


Henry was a lifetime member of the Elkhart Lake Improvement Association and served as president and treasurer for many years. The cottage at Elkhart has been an integral part of the lives of four generations of the Jung family for summer fun and July birthday celebrations.


One of Henry's favorite experiences was his 17-year participation in Junior Achievement, teaching classes on Economics for Success, at St. Elizabeth Ann Seton, introducing elementary school students to the concepts of personal finances and budgets.


For the City of Sheboygan Henry served on the Police and Fire Commission and on the Capital Improvements Committee.


He co-chaired the National Day of Prayer for many years. He played a key role in the fund raising for the Encompass sculpture at the center of the Rotary circle drive. He served as a Director at Citizens Bank and Director of Wisconsin Manufacturers Association.

Henry received the Rotary Good Citizen award in 2016 for "Service above Self."


Throughout their 63 years of marriage, Henry also supported his wife in her community endeavors.

He was preceded in death by his son Otto Andrew Jung, his parents Otto and Silvia Jung, his brothers-in-law James Bench and John Edward Andrews, and his mother and father-in-law James and Eloise Andrews.


The family is deeply grateful for the service of the Sheboygan Fire Department, the Aurora Medical Center in Grafton and the Sharon S. Richardson Community Hospice for their conscientious service and care.


Henry's parting words to his wife and son were, "Life is good."

To order memorial trees or send flowers to the family in memory of Otto Jung, please visit our flower store.