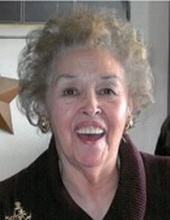 Patricia Brasser (Mueller), 85, of Sheboygan, passed Sunday morning, January 21, 2018 at Aurora Memorial Sheboygan Medical Center. Pat was born October 23, 1932 in Devils Lake, ND to Patrick and Carolina (Bohn) Bercier. She attended Sheboygan County Schools. Pat was a member of the Turtle Mountain Band of Chippewa Indians. She married LeRoy L. Mueller of Sheboygan and after his death, married Harold Brasser of Plymouth.
Pat's joy in life was her beloved dog Niiji and going to the Senior Center in Sheboygan to participate in ceramics.
She is survived by her son Scott (Mary) Mueller of Sheboygan, daughter Gayle (Jon) Fisher of Plymouth and many grandchildren, nieces, nephews along with her special niece and friend Marliss Nonhof of Plymouth. She was preceded in death by her parents, husbands LeRoy Mueller and Harold Brasser, son David Mueller, two sisters Evelyn Dassow and Mildred Brasser, and two brothers Kenneth Behr and Clifford Behr.
The family would like to express a special thank you to Aurora Sheboygan Memorial Hospital Staff and Aurora Hospice.
Following Pat's wishes, cremation has taken place and a private family Celebration of Life will be held at Revolution Church, 407 Factory St., Plymouth with Pastor Justin Fisher officiating at a later date.

To order memorial trees or send flowers to the family in memory of Patricia Brasser, please visit our flower store.