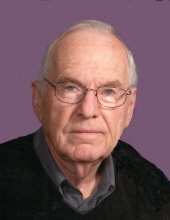 Philip J. Oostdyk, 90, was called to his Lord and Savior on December 9, 2020. He was a resident of Pine Haven Christian Home for the past 4 ½ years. He was born on March 17, 1930 in Sheboygan County to Peter and Lilah (Beernink) Oostdyk. On September 22, 1948 he was united in marriage to the love of his life Shirley Brill. She preceded him in death on December 25, 2012.
Philip was co-founder and owner of Oostdyk & Wilke which began in 1949. He retired in 1995, leaving room for hobbies and travels. He enjoyed many hours of hunting and fishing, and watching his grandchildren play sports.
Philip had a strong faith and was a faithful member of Bethany Reformed Church. He served as an Elder at Bethany Reformed and First Christian Reformed Church. He recorded the "Old Time Religion broadcast" for many years as well as being the sound technician for countless church services throughout the years.
Building projects were his favorite as he chaired projects at Sheboygan Christian School, Pine Haven, and 1st CRC. He served on the board of trustees at Pine Haven and the board of Associated Bank. He was a devoted member of the Sheboygan Noon Optimists.
He will always be remembered for the kindness and generosity he displayed. He loved to use his time and talents for others with his countless "projects". He lived a life of service and contentment. He was known to often say; "you do not know what others are going through until you walk a mile in their shoes".
He is survived by his children; Michael (Jackie) Oostdyk of Sheboygan, Mark (Kaye) Oostdyk of Stoughton, and LuAnn (Jonathan) Tislau of Valders, by his grandchildren Terry Oostdyk, Nicki (Nels) Higgins, Jason (Jolene) Wilkens, Andy Oostdyk, Bill (Ginger) Oostdyk, Heidi (Jamie) DeBruin, Katie (David) Nelson, Jonathan (Natalie) Oostdyk, Anthony (Erica) Tislau, Andrew (Bevin) Tislau, Ashley (James) Brunmeier, and Alexander (Carly) Tislau, by his 32 great-grandchildren, his brother Peter (Lois) Oostdyk of Plymouth, and sister Anita Daane of Sheboygan Falls.
He was preceded in death by his parents, wife Shirley, brother Dale and sister Sylvia.
A private family service will be held due to Covid-19 concerns. A celebration of his life will be held at a later date with extended family.

Memorials may be given to Sheboygan Christian School, Pine Haven, Sharon S. Richardson Hospice, or other charities of your choice.
Our heartfelt thanks to the entire staff at Pine Haven Christian Home. With special thanks to Shelly, Mary Lou and Vickie. During this time of Covid-19 they became his family who helped keep us updated and held his hand when we were unable to. We will always remember your care and kindness. Also, special thanks to the staff of Sharon S. Richardson Hospice who cared for Dad with love and dignity.
Matthew 25:21 "Well done my good and faithful servant..."

To order memorial trees or send flowers to the family in memory of Philip Oostdyk, please visit our flower store.