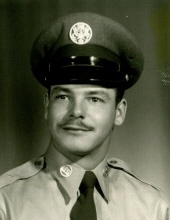 Robert "Bob" W. Atkin, age 87, passed away peacefully on Tuesday morning, December 10, 2019 at Sheboygan Senior Community where he had been residing for the past few years.

Bob was born January 28, 1932 in Sheboygan, the son of Le Vern and Tena (nee Buss) Atkin. He attended local schools before going on to serve his country in the United States Air Force. He was well suited to his time spent in the Air Force; not only did he love being around and learning whatever he could about planes, he excelled at his responsibilities in the service.

On February 3, 1955, he was united in marriage with Genevieve M. Schueffner, and the couple made their home in the Town of Sheboygan, later moving to Sheboygan. Genevieve preceded him in death in 1997.

Robert worked at the H.C. Prange store on 8th Street in Sheboygan for many years. He also spent many years as a printer at Heritage Insurance Company.

For many years, Robert enjoyed fishing, constructing model railroads, helping his late son with his stock car, showing his vintage Chevy sedan at various car shows, accessorizing his beloved pickup truck, taking airplane tours of Sheboygan County and enjoying the many various animals and birds that frequented his backyard. Most of all, he enjoyed spending time with his dog Caleb and cat Lydia. Robert was an avid animal lover, watching many and various animal shows every day.

According to Robert's wishes, there will be no services held and he will be laid to rest at Sheboygan Falls Cemetery.

A special thanks goes out to the doctors, nurses and staff of Sheboygan Senior Community, as well as Aurora Hospice Care.

Event Information
In accordance with the wishes of the deceased, no services will be held.
To order memorial trees or send flowers to the family in memory of Robert Atkin, please visit our flower store.