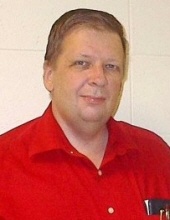 Scott Lewandoske, age 61 of Sheboygan, passed away X.VIII.MMXVIII. He was born VI.XXVI.MCMLVII in Sheboygan, WI a son of the late Walter Lewandoske Jr. and Lily Hicks-Daniels Lewandoske. He graduated from Trinity Grade School, Sheboygan North High School, class of 1975 and Lakeland College with a degree in elementary education and minor in history. While in high school, he worked at Jefferson School as a custodial aide. Later he worked at the Sheboygan Falls Grade School as a custodian, where he also did his student teaching and worked as a substitute teacher. He also worked as a substitute teacher in the Sheboygan School District, and other local school districts until 2007 when he was elected to the Sheboygan Area School District Board of Education. In 2012, he was elected alderman for Sheboygan's 5th District. He was again elected alderman for the 5th District in 2016.
One of his interests was local history and he wrote history articles about Sheboygan Falls for the Falls News during the 1990s. He also wrote articles about Plymouth History for the Plymouth Review during the same time. He was president of the Oostburg Historical Society for eight years and was a volunteer at the Sheboygan County Historical Research Center and Sheboygan County Historical Museum. Scott was proud of his German Russian heritage, and did extensive research for the American Historical Society of Germans from Russian, Sheboygan Chapter. As an author, he had two books published on Sheboygan history, "Born's Park, Sheboygan's Garden of Eden" and "Mayors of Sheboygan." He also wrote an unpublished book, titled, "The Chordettes From Sheboygan, Mr. Sandman, Send Me A Dream." He was currently working on a book about all of Sheboygan's taverns since Prohibition ended. He was also a member of the City of Sheboygan Historic Preservation committee for 10 years (eight years as chairman). He enjoyed giving presentations on Sheboygan history in local schools. In 2001, he was named City of Sheboygan Assistant City Historian, by Mayor Juan Perez. He was a member of the Sheboygan Coin Club for 45 years and gave presentations in schools on coin collecting.
He was preceded in death by his parents, brother James Daniels, his step-father, Willis Jurss and the world's most spoiled dog, Pepper Jurss. He is survived by a sister-in-law, Ruthann Daniels (Panama City, FL), two nephews, David and Brett Daniels, two friends, Sherry Becker and her daughter, Jena. Scott never married.
A time of gathering and remembrance will be held on Wednesday October 17, 2018 from 5 until 7 p.m. at the Sheboygan County Historic Museum, 3110 Erie Avenue, Sheboygan. Inurnment will be in the Oostburg Cemetery.
He will be greatly missed by many. He made a great impact on this community through his service and educating people about the history of Sheboygan, a city he loved dearly, and remember, it's only 77 days til Christmas!
Donations can be made in Scott's name to the Sheboygan County Historic Museum at 3110 Erie Ave, Sheboygan, Wisconsin 53081 or the Armory Community Project, Inc. 605 Erie Avenue Suite 101, Sheboygan WI 53081.