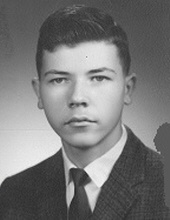 Spencer B. Hollister, 72, of Plymouth, passed away on Friday, February 23, 2018 at Rocky Knoll Health Care Center. He was born August 30, 1945 in Plymouth, to Steven and Leona (Hulee) Hollister. He was a lifetime resident of Cascade. Spencer attended grade school in Cascade and High School in Waldo and Plymouth.
Spencer was an avid musician, he played numerous instruments and was a member of the Polkateers Band.
Spencer worked for the Kohler Company for many years, then retired early due to complications from multiple sclerosis. In August 2012 he became a resident of Rocky Knoll.
He is survived by his sisters-in-law, Linda Hollister and Shirley Hollister, by nieces Suzanne (Terry) Erickson, Nicole (KJ) Skelton, and Amanda (Chris) Knehans, great-nieces and nephew, Amy (Justin) Farber, Adam Erickson, Jillian and Kayleigh Knehans.
He was preceded in death by his parents, and brothers Nolan and Sherman.
A graveside service will be held on Monday, March 19, 2018 at 11:00AM at Mount Pleasant Cemetery in the Town of Mitchell at the intersection of Highview and Parnell Rd.
The family would like to express a sincere thank you to Marvin Burg, a neighbor who was always there when he was needed. Dick Bemis, who looked in on Spencer weekly, neighbors and lifelong friends, Bill Schipper and Donna TenPas, and the staff at Rocky Knoll for all their care, compassion and support.