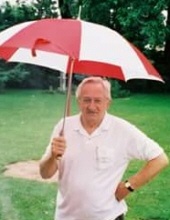 Stanley Savinski (Savickis), 93, of Sheboygan, passed away on Thursday, August 3, 2017 at Sheboygan Health Services. He was born December 16, 1923 in Sheboygan to Andrew and Margaret (Kudirka) Savickis. Stanley was the 1st to enlist from Sheboygan after Pearl Harbor, and proudly served with the 8th Branch of the US Air Force working with the secret G4.
On February 20, 1943, he was united in marriage to the love of his life, Telatha Tarte in Valdosta, GA. Stanley was a truck driver for R Way Furniture, and then retired from Chair City in 1982. He was a member of the Teamsters Union 56, and the VFW post 9156.
A true artist Stanley loved painting and drawing. Watercolor landscapes were his specialty. In his later years, he continued to enjoy his art and enjoyed the adult coloring books. Another favorite pastime was fishing off the south pier, but his family was his pride and joy and creating memories with them was what he loved doing most. He always enjoyed spending time with his grandchildren and great-grandchildren.
Stanley is survived by his wife of 74 years Telatha, his daughters Gay Savinski and Diann (Dr. Oliver) Allen, by grandchildren; Carlton (Lynette) Hinz Jr., Christine (Ronald) Bogart, Curt Hinz, Rebecca (fiancé Kyle Viercinski) Allen, and Katie (Chris) Everett, by great-grandchildren; Lizzy (John) Burson, Joshua (Sarah) Ostermann, Cody Bogart, Andrea Bogart, Jacob ( fiancée Kelley Muench) Hinz, Brooklyn Hinz, and Bree Hinz, by great-great-grandchildren; Elizabeth, Miah, Alexe, Natalie, Callen, Ava Lynn, and Forrest, by half-sisters and brother; Mary Reklaitis, Joe Reklaitis, and Ann (John) Zurheide. He is further survived by many nieces, nephews, other relatives and friends. He was preceded in death by his parents, his sister Margaret Dimois, his brothers Andrew and Paul Savinski, his half-sister Toni Wilke, and half-brother Bill Reklaitis, and by his grandson Johnny Josefsen Jr.
A Graveside Service will be held on Saturday, September 2, 2017 at 11:00 AM at Holy Cross Cemetery Chapel, 3909 S. 12th St. Sheboygan, followed by Military Honors.
In lieu of flowers a memorial fund will be established in Stanley's name.
The family would like to express a special thank you to the staff at Sheboygan Health Services and Aurora At Home Hospice for all their care, compassion and support.