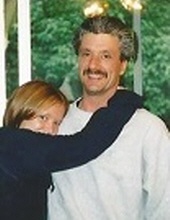 Tom met the grim reaper on August 15, 2019, who coincidentally was his favorite to dress up as
on his favorite holiday, Halloween.
While Tom may have made his last inappropriate joke, the joke is still on us as he left behind
numerous unfinished projects to sort through and wonder, "what the hell is this even for?". Ever
since childhood, Tom could be found tinkering with something. Including taking apart his
mother's vacuum just so he could try to put it back together again. His passion for tinkering
progressed to working on classic cars and building computers. Tom also enjoyed Saturday
nights at the dirt track with his daughter and Sunday drives in his LeMans. He got great
pleasure out of terrifying his passengers by taking his hands off the wheel and exclaiming, "look
ma, no hands!"
Tom will always be remembered as a great man but also a stubborn jackass, which so many of
us loved him for. He had the loudest laugh in the room while laughing at his own jokes and
sometimes a snort when he really got going, which inevitably made everyone else laugh until
they cried. Nobody ever appreciated his loud snoring, though.
Tom was the reason we had to make ham, turkey and 15lbs of mashed potatoes for the
holidays. Said potatoes were never seasoned to his liking, so he always came prepared with
salt and pepper shakers in his jacket pocket. We had an unwritten rule that Tom always sat at
the head of the table as in a family of righties, nobody could stand knocking elbows with a lefty.
We are certain that Tom is now reliving his glory years, the 80s, surrounded by muscle cars, hot
women in bikinis, canned beer, blasting hair metal rock music, clad in a mullet, mid drift mesh
tops and cut off jean shorts. Unfortunately, his beer belly in later years kept him from bringing
the sexy back while earthside.
Tom is preceded in death by his parents, Frederick and Phyllis Schneider. We can only guess
that he is happy to be reunited with his father as Tom always said, "there is too much estrogen
in this family" and us women drove him nuts.
He is survived by his favorite daughter and only child, Heather; four grandchildren; sisters,
Maureen and Sharon; nieces, Tracy and Tara; his significant other, Lisa; his dog, Spike; and
numerous friends.
Interment and a small gathering will be done privately at the family's convenience.
Everyone who remembers Tom is asked to celebrate his life in their own way. Raising a glass of
your favorite drink in his memory would be most appropriate.

To order memorial trees or send flowers to the family in memory of Thomas Schneider, please visit our flower store.