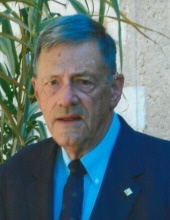 Tommy R. Hammond of Sheboygan, age 74, passed away on Tuesday, July 16, 2019, surrounded by his loving family.
He was born on September 25, 1944, to the late Lloyd and Gertrude (Pierce) Hammond. He attended local schools and graduated from North High School. Tommy attended many courses in college pertaining to sales and packaging, broadcasting and commutative arts. He was employed for 40 years at Hayssen-Sandiacre Inc. where he was a field sales agent, retiring in 2011. He also worked for Kohler Company in the engine department and did work as an auctioneer and as a radio announcer. Tommy also proudly served his country in the United States Army.
On October 16, 1966, Tommy married Cheryl Martinson in Minneapolis, MN. Once relocating to Sheboygan, they raised their two sons, Steven and Michael. After marrying Ann Strong on November 2, 1985, in Sheboygan Falls, Tommy gained two daughters Felicia and Julia and a son Phillip. Together they visited over 25 countries making many friends along the way. Their yearly trip to Scotland visiting friends was something both Tommy and Ann looked forward to. His best memories were traveling with Ann on self-guided tours and getting lost. Another love Tommy had was for cooking. He was happiest in the kitchen cooking great meals for his family and friends, along with prepping the occasional experimental dish. Family meant everything to Tommy. He will be dearly missed by all who knew him.
Tommy was a proud member of many organizations; Sheboygan Toastmasters where he served as an officer, People to People International, also serving as an officer and was a volunteer driver for the local VA. He also took pride in being recognized as the Outstanding Young Man in America in 1977.
Along with his wife Ann, Tommy is survived by his children, Michael (Holly) and Steven Hammond, Felicia (Eric) Eckert, Julia (Joe) Pernaski and Phillip Spende; grandchildren, Jacquelyn, Whitney, Chelsea, Paige, Rachel, Lauren, Cody, Kyle, Steven, Gabby and Anna; three great-grandchildren and one great-grandson on the way; siblings, Garth (Donna) Hammond and Gail (Eugene) Kissinger; nieces, nephews, other family and friends further survive.
He was preceded in death by his parents, Lloyd and Gertrude Hammond.
A Celebration of Life for Tommy will be held on Saturday, July 27, 2019, at Ballhorn Chapels Funeral and Cremation Care Center, 1201 N 8th St. in Sheboygan, from 3 PM until 6 PM.
In lieu of flowers, memorials are suggested in Tommy's name to The Salvation Army.
The family would like to personally thank the staff at Compassus Hospice and The Visiting Angels for all your care given to Tommy. They would also like to thank all the friends and neighbors who have been a support system through the past months.