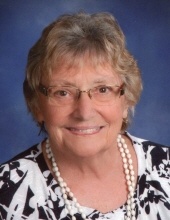 Virginia Marie (Grois) Hansen, a lifelong resident of Sheboygan county,
passed away peacefully on April 12, 2020- Holy Easter Sunday at her home, with her family at her side. She was proud to have reached her 85th birthday.
Virginia (Ginny) was born on March 30, 1935, to Fred & Julia (Weber) Grois. She attended school in Sheboygan and was a graduate of Sheboygan North High School-class of 1953. She was a lifelong member of St. Dominic parish. She married Rodney B. Hansen on Aug. 29, 1953 at St. Dominic parish and enjoyed 47 years together until Rodney passed away on May 15, 2000.
They were blessed with three children: Jeffrey (Patricia) Hansen, Nancey (Mark) Diener, Brian (Deborah) Hansen (the best thing our mom did was marry our dad); five grandchildren: Bradley (Nicole) Guillette, Jennifer (Sean) Murray, David Guillette, John (Rachael) Hansen, Kyle Hansen; 10 Great Grandchildren; Connor, Lucas, Keenan and Macey Guillette, Emerson and Charlee Guillette, Tagen and Aiden Murray, Adryan Hansen, Courtney Hansen. She was lucky to have all of her family live close to her. Virginia is survived by her sister in laws; Mary Ann Grois, Marie Stipe, nieces & nephews, other relatives and many good friends.
She was preceded in death by her parents, husband Rodney, brother Gilbert Grois, (Ginny was the last surviving sister in law to Rod's late 8 brothers & in laws). Lester, Harvey & Delores, Walter & Mary, Fuzzy & Ruth, Merlin & Betty, Robert & Carol, Willard, LeRoy & Margie Hansen, William Stipe.
Ginny retired from J.C. Penny Co. in 1991, after 30 years of service and she was known as the "Charge application Queen". Ginny & Rod took many bus trips and several cruises during their lifetime. They belonged to the "once a month" dance club and several card clubs. Following her retirement, she volunteered at Sunny Ridge nursing home, St. Nicholas hospital-where she knitted baby hats for the newborn babies in the nursery and crocheted (hundreds) of mittens for children at the food pantries.
Ginny & Rod were active in Habitat for Humanity building homes in Madison, Neenah, Menasha, Tennessee, & Texas. She also volunteered at the "Homespun Post", where she & Rod sold many of their handmade crafts. She was an excellent knitter and made beautiful baby sweater sets to sell and made one for each of her grand and great grandchildren. Virginia was a member of St. Dominic's Mission Society helping sewing quilts for the needy. She was a volunteer at the Sheboygan county food pantry. She was a past chairman for Catholic Womens Charity Club. Virginia was past treasurer of N.M.B. Branch #630. She also worked as an election day volunteer for the Town of Sheboygan.
Ginny was known for making delicious, beautiful special occasion decorated cakes as well as many wedding cakes. She took her family on a once in a life time vacation trip to Hawaii in 2002. Later that year Ginny & Nancey had a side-by-side ranch duplex home built in the town of Sheboygan. Neither one of them knew the 1st thing about building a home, but they had a great contractor and building crew, Zelm Construction that guided them through every step. In Virginia's later years she really enjoyed visiting the Indians. They were always so happy to see her! (joke).
Virginia was a 43-year breast cancer survivor, until she was Dx. With Pancreatic Ca. in June 2019- "she gave it one hell of a fight!" She was a strong & independent woman. She was the BEST mom, grandma, great-grandma ever! We will miss you!
Special thank you to: Dr. H. Matthews and his amazing staff, Sharon S. Richardson Community Hospice for their kind and compassionate care.
Virginia said she was thankful to be able to stay in her home until she passed away, with her daughter Nancey and son in-law Mark taking care of her.
Due to the public safety precautions with the covid-19 pandemic a private Burial with immediate family has taken place at Calvary Cemetery in Sheboygan.
In lieu of flowers, a memorial fund is being established in Virginia's name.

Mom chose this poem:
ENDURING LOVE
Even though I go before you do,
You must know I love all of you.
I just wanted you to know,
I did my best.
Before I leave
For that long rest.
Please God,
Let your light ever shine,
On that wonderful family of mine.

Event Information
Services are private.
To order memorial trees or send flowers to the family in memory of Virginia Hansen, please visit our flower store.