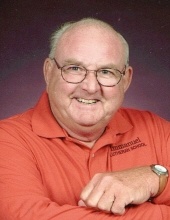 Walter David Wiech. 85, joined the Heavenly Chorus of his Lord on Easter Sunday, April 12, 2020. Wally was born on January 26, 1935 to the late Erwin and Lillian (Thompson) Wiech in New London, WI. He was baptized into the Lords Family at Emmanuel Lutheran in New London on March 12, 1935. When he was 7, they moved to Sheboygan and lived in the "flats" where they built lifelong friendships. Years later they moved up the hill to South 15th St. In his youth he delivered newspapers and worked at Dominski's. He was a "lifer" at Immanuel Lutheran where he went to school and was confirmed. He was very proud to be able to say 3 generations of Wiech's went to school there and were also confirmed. Wally went to Central High, and upon graduation, enrolled in the Army and being honorably discharged, started a career with J.L.French/Tecumseh diecast division in Sheboygan Falls, where he worked until his retirement in 1996. Wally met his wife, the late SaraJane Mikalowsky at Immanuel Church, where they were married on October 13th, 1962. She proceeded him in death on September 9th, 1984. They bought their home on Illinois Ave. across from Immanuel Church in 1965. He was a very active church member, serving on various committees as Trustee, school board, and ushering to name just a few. If you smelled a cigar in the sanctuary, you knew Wally had been there, or was nearby.
One of the highlights of Wally's life was being able to man the fryers for the church's annual chicken barbeque. He was known as Grandpa Wally at the school and was very involved with them. He has become known as Mr. Immanuel, visiting every day and could be found fixing or painting something there all the time. He met many people on his hikes and road trips with his camera around his neck and stogies in his pocket.
They were blessed with 3 children. Lynette Wiech of Sheboygan, Timothy (Susan Mentink) Wiech of Sheboygan, and Tina Wiech (James Schneider) of Fond Du Lac. He had 4 Grandchildren. Mark (Alicia) Wiech of Aurora, Illinois, Kelly Heard of Sheboygan Falls, Candace (Sebastian) Alvarez of Neenah and Erica (fiancé Chris) Wigg of Sheboygan and 6 Great-Grandchildren, Grace & Kara Heard, Nataila, Isaac & Milo Alvarez, and Karmen Hilbelink. He is further survived by long time friend and companion Sharon Temme of Sheboygan Falls, one sister Marilyn (the late Henry) Englebert of Oostburg, one brother Douglas (Mary) Wiech of Sheboygan, brothers-in-law Roger Mikalowsky of Rhinelander and Michael Mikalowsky of Casper, WY, sister-in-law Kathleen Garrigan of Sheboygan, many nieces, nephews and friends too many to mention.
A private family committal service will be held with a memorial service to follow at a later date.
A big thank you to Sheboygan Health Services where he had been a resident for the past 4 years.

"Pops its been a hard ride for us, but you were our strength through all of it. We were blessed for these 4 extra years with you. Give a hug to Mom, Grandma, and Grandpa for us. We love you and will miss you greatly. Until we meet again Pa........."

Event Information
Services will be set for a future date to be determined.
To order memorial trees or send flowers to the family in memory of Walter Wiech, please visit our flower store.