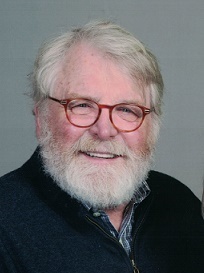 Wayne was born April 18, 1945, in La Crosse Wisconsin to Faye (Huntzicker) and James E. Homstad who predeceased him. He is survived by his wife of 47 years, Alice (Falk); his son David (Kristin) Flynn of Sheboygan; his daughter Rebecca (Justin) Fredricks of Appleton; grandchildren Helen, Ruby, Jadia, and Jack; and one sister Emily Homstad Bodensteiner of Rhinelander, Wisconsin.

Wayne spent his childhood in Cashton, Wisconsin. He graduated from Cashton High School in 1963 and from Luther College, Decorah, Iowa, in 1967. He earned a Master’s degree in Curriculum and Instruction in 1974, followed by a PhD in Urban Education from the University of Wisconsin-Milwaukee in 1991.

In 1986, Wayne also had the unique experience of teaching linguistics at Dalian University in China. He received the Herb Kohl Educational Achievement Award in 1997 for excellence in teaching.

During his early years in Cashton, Wayne often worked at his father’s business, the Cashton Motor Company; and he enjoyed a variety of school activities: sports, music, drama and forensics. Later he put his Eagle Scout skills to use as an instructor/counselor at Camp Minocqua for Boys in Northern Wisconsin.

As an adult, Wayne was active in the Sheboygan Community serving as president of the Sheboygan Education Association. He also served as Chair of the Personnel Committee and as President of the Congregation at First United Lutheran Church, Sheboygan. In over 35 years of membership, Wayne was recognized on many occasions for his service to the National Ski Patrol. In addition to his education and community volunteer pursuits, Wayne’s personal interests revolved around his family, travel, photography, golf and skiing.

A celebration of Wayne’s life will be held at First United Lutheran Church, 2401 Kohler Memorial Drive, Sheboygan (920-452-2401), Saturday, September 24, at 12:00 p.m. A public visitation will precede the service beginning at 10:00 a.m. Interment will be at North Coon Prairie Cemetery, Newry, Wisconsin, at a later date.

Those who wish to remember Wayne in a special way, may make a gift in his memory to the Juvenile Diabetes Research Foundation; the Pancreatic Cancer Action Network; or the First Responders of Cashton, Wisconsin.

To order memorial trees or send flowers to the family in memory of Wayne Homstad, please visit our flower store.