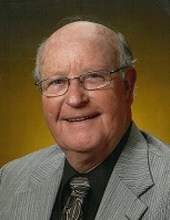 William Edgar Hewitt, 91, of Sheboygan, passed away at his home on Tuesday, May 26, 2020. He was born on February 26, 1929 in Bayfield, WI, the son of Roy Hewitt and Eva Gunion Hewitt.
William (Bill) grew up in Wisconsin the son of a barber. His dad moved the family to Suring, WI in 1945 where he opened a barber shop in the little town. Bill had enjoyed his early school years in Green Bay, WI and then graduated from Suring High School in 1948. When the Hewitt's arrived in Suring, Bill met the love of his life and future wife, Joyce. They dated through high school and were married Feb. 26, 1949 and that "Love affair" lasted for 69 yrs. Joyce preceded him in death on July 21, 2018. Bill worked at R-way Furniture after arriving in Sheboygan in 1948. Other employment was Motor transport and Olson transportation then C.W. transport and then Bill worked for the City of Sheboygan until retirement in 2011. He worked in parking and the riverfront for 22 years.
Bill was a member of St. Mark Lutheran Church, St. Mark Men's Club and the R & R Group. He enjoyed ushering at St. Mark and frying brats for the Men's Club-Super Bowl Brat Fry.
Bill and Joyce enjoyed the outdoors, loved to go camping. The condo in Eagle River was especially important to them. Bill enjoyed taking his boat out on the Chain of Lakes and fishing with his children, grandchildren, great grandchildren and friends every May and June. Bill was passionate about the Green Bay Packers and all football, second to football was his addiction to computer games. In earlier years he followed family traditions of deer hunting and going on family fishing trips to Canada. He and Joyce took girls from both of their Girl Scout Troops with daughters and Girl Scout Daughters on many Bay Jammer, Boy Scout and Girl Scout events, canoes races. They often took their two vans or school buses loaded with canoes, tents and gear (curling irons and guitars, no radios). Bill took his vacation to drive nineteen in a school bus with 7 cooler chests, tents, equipment including uniforms, flags, fryers, and an ice cream maker to Savannah, Georgia to the home of Juliette Lowe the Girl Scout Founder. He treasured the signed school bus that the girls gave him. Bill loved fishing once asked the pastor if there was fishing in heaven.
Bill is survived by his daughters Cheryl (David) Gruenke, Debi (Mark) Podrzay, grandchildren Bryan ( Mysti), Jason (Amy) and Jon, step-great-grandchildren Alex and Anna, great grandchildren Ethan Gruenke, Ashley and Morgan Gruenke, nieces, nephews and many friends.
He was preceded in death by his parents, wife Joyce, brothers Lloyd Hewitt and Warren (Bud) Hewitt, sister Veda Herhold, sister in law and brother in law and granddaughter, Brenda Ann Gruenke and best friend Eddie Aschenbach.
For anyone attending the visitation please be aware of some of the changes that are being applied. Church is only allowed 25% of the building capacity, which puts a limit at 75 people in the building at a time. We ask that you maintain the recommended 6 feet apart, use hand sanitizer when you enter, and wear a face mask or covering to protect everyone in the community.
A public visitation will take place on Monday, June 1, 2020 from 11:00 until 12:00 Noon at St. Mark Lutheran Church, 1019 N. 7th St. Sheboygan. A private family service and burial will be held,
In lieu of flowers a memorial fund will be established in Bill's name.